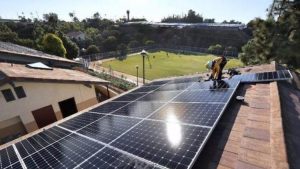 ortion and the death penalty have long been cardinal beliefs for the Roman Catholic church, whose faithful make up about a quarter of all Americans. What if fighting climate change becomes an equally passionate issue in parishes nationwide? The foremost group of Catholic leaders in the U.S. is ramping up a campaign to do just that, urging priests and congregations from San Diego to Atlanta to think about global warming as a sanctity-of-life issue.” –Source

First and foremost we know climate change and or global warming is a bold faced lie. Way too many scientists chimed in on paper to expose the Pope on this. Secondly, we know the Roman Catholic church only uses the abortion issue as a way to keep their political foot in the door at every turn. It also allows them to keep a huge voting bloc at the ready knowing their parishioners will vote pro-Catholic because their 501c3 priests ignore 100% of every rule and regulation posted in the fine print of that contract the dying god of this world inspired Lyndon Johnson to write back in 1954. And yes, they could care less about aborting babies as well. Anyone with access to any Roman Catholic hospital knows all too well about that fact. Click here for a growing page on my website exposing the Catholic hospitals that do kill little girls and boys as well as some comments from the present Pope making abortion appear as a lesser sin with the Lord in recent days.

As for the death penalty. Again, just another bruised foot in the door of American politics so that the Vatican can keep a moral appearance well-polished (like the Pharisees did) as well as a certain power behind any man standing in that Oval Office. In fact, their historic past wherein hundreds of millions of Christians were sentenced to death for simply refusing to become Catholics and their present day Islamic henchmen continuing their work of days of old. Climate change is prophesied as the man of sin’s main means to bring about the mark of the beast in Rome. In fact, click here for a growing compilation of articles and videos confirming that as a fulfilled prophetic fact.

As soon as enough nations bow in worship to the Pope and his long prophesied November 04, 2016 COP21 Paris agenda confirmed, he will soon drop the other shoe and use the calamities on earth as a way to enforce his Sunday laws. But I will end this here as I hope to share a tad more in next Sabbath’s sermon on this regard. The strange weather events all over the planet the last few years reveals the calamities the Pope will soon use are escalating to a fever pitch as expected. And so.. we must warn the people. The mark will be enforced soon.

Florida has more death row inmates than nearly any other state in the country, and it remains a bastion of capital punishment as fewer executions are carried out nationwide. But after a frantic few months that saw Florida’s system of imposing death sentences struck down and rewritten, it remains an open question what will happen to the hundreds who remain on the state’s death row — and how much longer any of them will stay there.

On Thursday, the Florida Supreme Court heard arguments in a case that could lead to nearly 400 death-row prisoners receiving life sentences, a move experts say could be the country’s single biggest jettisoning of death sentences in decades.

“We’re looking at potentially the largest number of death sentences being vacated at a single time” since the early 1970s, said Robert Dunham, executive director of the Death Penalty Information Center.  Source