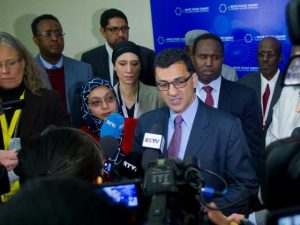 “Administration officials have eliminated 2016 plans to fund Islamic groups allied to former President Barack Obama, and declined to schedule a 2017 Islamic ‘Iftar’ dinner where those groups were able to show their political influence to the ambassadors of wealthy Islamic countries. The turnaround was made public on Friday when the Department of Homeland Security announced a revised list of the organizations which are getting DHS funds to help prevent young Muslims from becoming jihadis. The new list replaced an Obama list announced January 13, 2017, and it dropped a $800,000 grant for an Islamic seminary in Los Angeles, and a $393,000 grant for a linked organization, the Muslim Public Affairs Council Foundation.” –Source

This is by far, too little too late. In fact, it’s all a farce as the DHS is still allowing Muslims to be funded and schooling some to supposedly “prevent young Muslims from becoming jihadis.” The fact we now have over 35 Islamic military training compounds on US soil right now shows, this is all propaganda. Why doesn’t the DHS shut them down? But then this is the so called unbiased DHS talking now. If they were unbiased under Obama and saw a genuine threat to homeland security, they never would have allowed Muslims into the nation under Obama or any president for that matter. Because as Obama, Clinton and the Bush family proved in just the last few decades alone, some US Presidents are all about helping those that will destroy America.   END_OF_DOCUMENT_TOKEN_TO_BE_REPLACED 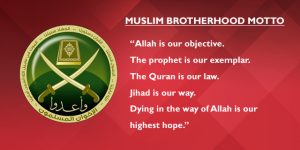 “A Georgetown professor has penned a column in the Washington Post saying the Muslim Brotherhood does not exist in America and even if it did, it’s an entirely peaceful organization. In an op-ed titled “Calling the Muslim Brotherhood a Terrorist Organization Would Hurt All American Muslims,” Professor Arjun Singh Sethi says that “the Brotherhood disavowed violence long ago.” Groups such as the Council on American-Islamic Relations or CAIR, the Islamic Society of North America or ISNA and Muslim Student Association or MSA have “no connection to it,” according to Sethi, even though the connections have been documented by countless other scholars, FBI officials and investigative journalists. He also tries to discredit the much-quoted “Explanatory Memorandum on the General Strategic Goal for the Group in North America,” authored by Brotherhood member Mohamed Akram. “This memorandum, of which there is only one known copy, has been widely discredited and called a fantasy,” Sethi writes.” –Source

One would think that him being a Professor he would have done just a tad bit more research before publishing such folderol any journalist wannabe could research out in their kitchen on any cellphone to find the real truth on this. But being a Professor in a Vatican funded Jesuit University one has to realize the power behind the comment and so the demographic research would have to be looked at to assure a positive outcome on all this before releasing such a statement. The numbers are there and they knew before going to press that the majority in the nation, and those Soros and Rome pay to riot in the streets, are the type of sheeple anyone with viable gray matter knows to be morally unstable to the point they would switch sides at the drop of a dime; or maybe a bulging promised bag of bitcoins, (perhaps 30?) and so they needed to make sure the to appeal to employed rioters would believe such comments as we see this Professor sharing. I mean after all, they don’t want to upset the pawns unless they can profit by their ill repute en masse; and one can rest assured martial law can be quite profitable for those in power. Especially those that purchased nationally sized portions of dry goods they can sell at puffed up prices when the store shelves go empty. (BTW: For those that don’t think Soros is working with Catholics, click here)

END_OF_DOCUMENT_TOKEN_TO_BE_REPLACED

CHICAGO (RNS) In his final speech as president of the United States, President  Obama spoke of his faith in American democracy and warned his supporters not to retreat into despair.

Obama had returned to his adopted hometown of Chicago for his farewell address Tuesday night (Jan. 10) at McCormick Place.

It’s the city where his political career began — where he had given his victory speeches on election night in 2008 at Grant Park and in 2012, also at McCormick Place.   END_OF_DOCUMENT_TOKEN_TO_BE_REPLACED

“The latest WikiLeaks dump of John Podesta emails shows the Obama administration kept a list of high-profile Muslims it wanted to appoint to top administration jobs, sub-cabinet jobs and outside boards, agencies and policy committees. The 2008 emails reveal that it wasn’t enough to be Arab American, you had to be Arab and Muslim to make it onto this list.” –Source

And why is that you ask? It’s because Barack Hussein Obama is in fact a Muslim. I have quite the mountain of evidence compiled to confirm that as a bonafide fact listed here. Now don’t get me wrong. He is the American president and being as such he needs our prayers. For it is plainly stated in Romans 13:1-7 he is ordained of God to be in that oval office whether you like it or not. And as we see from the Old to the New Testament, the obedient people of God did always pray for their kings. This also included the conquering kings that took them captive.   END_OF_DOCUMENT_TOKEN_TO_BE_REPLACED

“The Obama administration long has been forcing Christians and others of faith to violate their beliefs to accommodate “nondiscrimination” laws that give special privileges to homosexuals and transgendered persons, and now a federal commission has proposed codifying the practice. …Democratic Party presidential nominee Hillary Clinton is on record insisting that to protect “gay” rights, “deep-seated cultural codes, religious beliefs and structural biases have to be changed.” (See her say that in this video) …The commissioners deliberately chose to single out for denigration Christian colleges or organizations that don’t promote homosexuality and business owners who choose not to endorse homosexuality with their artistic talents, such as photography and cake-making. …He and the other members of the commission who agree with him want to throw out the First Amendment and trash religious freedom whenever faith and practice collides with an intolerant LGBT agenda,” Staver said. “The report is a declaration of war against religious freedom. George Washington said anyone who works against the twin pillars of religion and morality cannot be called a ‘Patriot.’ This report is un-American.”- Source

Prophecy stated clearly that the United States of America would start out as a Christian nation only later to turn completely against Christians and actually attack them for their biblically based faith. For more on that prophetic fact click here. If you look into that prophecy you will see the only reason the United States eventually goes against the forefathers and their Christian faith that was instrumental in reaping all the blessings we saw as a nation in our infancy is because this great nation would eventually be infiltrated by Roman Catholic Jesuits who would con our leaders in Congress as well as the churches to join hands with the largest known homosexual organization known to man throughout history. And yes, I am talking about the Roman Catholic Vatican. Rome’s homosexual agenda has poisoned America just as prophecy predicted it would and the only reason they use the homosexual people at all is because as prophecy also predicted, they will be the most hateful people towards Jesus Christ inthe last days. Anyone in a business that caters to the general public knows what I mean here. And so, such fruits are very useful for Rome in getting their long prophesied agenda met.  END_OF_DOCUMENT_TOKEN_TO_BE_REPLACED

HONOLULU ― Days after creating the largest marine protected area on the planet, President Barack Obama on Wednesday traveled to Hawaii to address those attending the world’s largest conservation event, highlighting his administration’s expansion of the nearby monument and the need to swiftly combat climate change.

“No nation, not even one as powerful as the United States, is immune from a changing climate,” Obama told a small, private audience at Honolulu’s East-West Center that included the Pacific Island Conference of Leaders and delegates of the International Union for Conservation of Nature’s World Conservation Congress.

END_OF_DOCUMENT_TOKEN_TO_BE_REPLACED 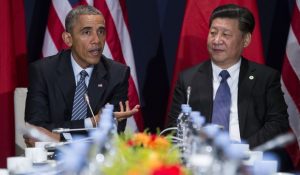 The White House on Monday defended President Obama’s decision to enter into the Paris climate accord without Senate ratification but stopped short of confirming a Chinese report that he will do so this week during his trip to China.

Still, it would surprise no one if Mr. Obama and Chinese President Xi Jinping were to announce the ratification of the sweeping climate change agreement before the Sunday opening of the Group of 20 summit in Hangzhou, Zhejiang.

White House senior adviser Brian Deese said the president has the legal authority to ratify the accord without the two-thirds Senate vote required for treaties. He said the pact negotiated by 195 countries in December is merely an “executive agreement.”  END_OF_DOCUMENT_TOKEN_TO_BE_REPLACED

Posted on September 2, 2016September 2, 2016 by Gospel Order 0
The American Center for Law and Justice filed a “massive” federal lawsuit Tuesday against the U.S. State Department over what it calls the department’s “inaction on genocide.”

The ACLJ said the lawsuit was filed against the State Department “for failing to provide information about actions the Obama administration is taking to stop the genocide of Christians by ISIS – the Islamic State.”

“Christians are being horrifically slaughtered,” ACLJ Chief Counsel Jay Sekulow said. “This wretched evil is unthinkable. It must be stopped.” END_OF_DOCUMENT_TOKEN_TO_BE_REPLACED 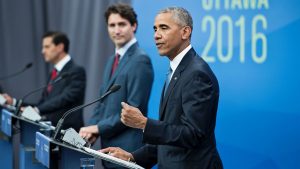 The global economy is “here” and “done,” President Obama said Wednesday — the question now is under what terms it will be shaped.

Obama spoke at a news conference that was dominated by questions about global trade, the effects of Brexit, and Donald Trump. It followed a summit meeting with the leaders of Canada and Mexico in Ottawa.

“Integration of national economies into a global economy, that’s here, that’s done,” Obama said. Speaking on the second day of a stock market rally, which came after sharp drops following Great Britain’s vote to leave the European Union, Obama said it was important not to draw analogies to what happened with Brexit with trade relations between the U.S., Mexico, and Canada. Obama said ordinary people with concerns about global trade “have a legitimate gripe with globalization.”

END_OF_DOCUMENT_TOKEN_TO_BE_REPLACED

It’s not only illegal aliens who are escaping enforcement of the nation’s immigration laws.
Under the Obama administration’s expansive interpretation of executive authority,  legal immigrants seeking citizenship through the nation’s Naturalization process are now exempt from a key part of the Oath of Allegiance.  Continue reading…