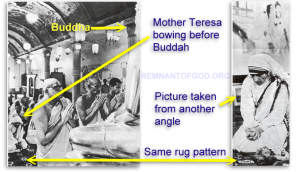 “VATICAN CITY (Reuters) – Mother Teresa of Calcutta, known as the “saint of the gutters” during her life, was declared a saint of the Roman Catholic Church by Pope Francis on Sunday, fast-tracked to canonization just 19 years after her death. Tens of thousands of pilgrims packed St. Peter’s Square at the Vatican for a service to honor the tiny nun, who worked among the world’s neediest in the slums of the Indian city now called Kolkata and become one of the most recognizable faces of the 20th century.” –Source

There’s only one reason, well actually 100,000,000 reasons why the Pope declared Mother Teresa a saint. Her ministry brings in at least $100 million dollars a year into the Vatican coffers and so they must declare her a saint to keep the money flowing. But, there is a more sinister reason he is doing this. Mother Teresa was not a Christian. She even wanted to quit and leave the order because she said, and I quote, “Where is my faith? Even deep down… there is nothing but emptiness and darkness… If there be God, please forgive me.” She also said, “What do I labor for? If there be no God, there can be no soul. If there be no soul then, Jesus, You also are not true.” (-Source of these quotes and MUCH more)   END_OF_DOCUMENT_TOKEN_TO_BE_REPLACED