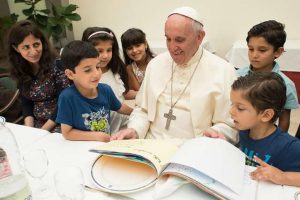 ROME – Nur Essa, a Muslim Syrian woman whose family was brought to Rome from Lesbos by Pope Francis last April, said that the openness he has shown to those of different faiths has deeply impressed her.

“For me, I was surprised,” she told CNA. “(He is) very open to all of the cultures, all of the religions, and he sets an example for all the religious people in the world, because he uses religion to serve the human being.”

Essa, 31, has met the pope on several occasions, most recently during the pope’s visit on February 17th to Roma Tre University, a public research university in Rome where she currently studies. END_OF_DOCUMENT_TOKEN_TO_BE_REPLACED