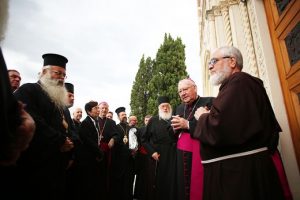 At an ecumenical gathering held this week, representatives of the Catholic and Orthodox Churches signed a joint document regarding synodality and primacy during the first millennium.

The agreement can point to ways of “resolving problems still existing between Catholics and Orthodox today,” said Msgr. Andrea Palmieri, undersecretary of the Pontifical Council for Promoting Christian Unity.

The 14th plenary session of the Joint International Commission for Theological Dialogue between the Orthodox and Catholic Churches was held in the Italian city of Chieti Sept. 15-22. Their agreement was subtitled “Towards a Common Understanding in Service to the Unity of the Church.”

The primacy of the Bishop of Rome is among the main points of disagreement between the Catholic and Eastern Orthodox Churches.   END_OF_DOCUMENT_TOKEN_TO_BE_REPLACED