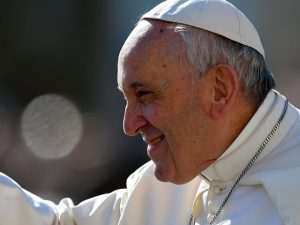 “Until now, the two ordinary ways to being declared a saint were martyrdom for Christ and the practice of “heroic virtue.” A third, exceptional way also existed: that of “ancient veneration” of a person as a saint. According to Catholic teaching, every person who goes to heaven is a saint, but a small percentage of these are officially recognized as saints and put forward as examples and models of a closer following of Christ. The new decision follows on a process carried out by the Vatican Congregation for the Causes of Saints, which asked “whether those servants of God are not worthy of beatification who, inspired by the example of Christ, freely and deliberately offered and sacrificed their lives for their brothers and sisters in a supreme act of charity. While this new “fourth way” of the offering of one’s life closely resembles both the path of martyrdom and that of heroic virtue in certain respects, it has been put forward to underscore a specific form of heroic Christian witness. ” –Source

As the article eludes to; according to the Pope there are now 4 pathways to becoming a saint according to Roman dogma. And I say according to Roman dogma because anyone with a Bible can see this is not how the Lord defines a saint. As many of you know, I used to be Roman Catholic 30+ years ago and so I know exactly what they teach here when it comes to becoming a saint in Roman Catholicism. But to make a long story short, I will quote from the Vatican approved website known as the Catholic Education Resource Center, which states, “Today the process proceeds as follows: When a person dies who has “fame of sanctity” or “fame of martyrdom,” the Bishop of the Diocese usually initiates the investigation. One element is whether any special favor or miracle has been granted through this candidate saint’s intercession.”    END_OF_DOCUMENT_TOKEN_TO_BE_REPLACED