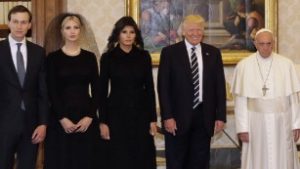 As I have been wondering for months since Trump’s daughter Ivanka made climate change her focus in her father’s White House; when will Trump finally cave on this long prophesied agenda of the Pope regarding climate change? Well, this meeting is not only the focus of a new video I’m working on, (from last Friday’s blog entry) it’s also what all students of prophecy have been watching for all along because we know prophecy will be fulfilled no matter how much Trump is against it. And as expected, Trump had his meeting with the Pope, and as was also expected they had their meeting behind closed doors so as to keep the people they promised transparency with are kept in the dark, because as also prophesied their deeds are from the darkened realm of Satan. And if their constituents knew they would boldly revolt.  END_OF_DOCUMENT_TOKEN_TO_BE_REPLACED 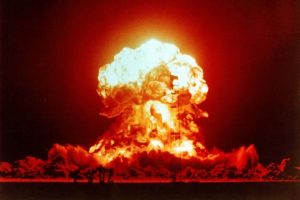 Shia Muslim religious leaders from Iran and U.S. Catholic bishops say they have a common fight against weapons of mass destruction, terrorism, and violent religious extremism.

“Christianity and Islam share a commitment to love and respect for the life, dignity, and welfare of all members of the human community,” they said in an Aug. 18 joint declaration. “Peaceful coexistence is built on equity and justice. We call upon all to work toward developing a culture of encounter, tolerance, dialogue, and peace that respects the religious traditions of others.”

The two delegations agreed that belief in one God unifies Jews, Christians, and Muslims.  END_OF_DOCUMENT_TOKEN_TO_BE_REPLACED

The head of the Russian Orthodox Church has called the fight against terrorism a “holy war” and urged international unity and an abandoning of double standards to defeat this global evil.

“Today, when our warriors take part in combat operations in the Middle East, we know that this is not an aggression, occupation or an attempt to impose some ideology on other people, this has nothing to do with supporting certain governments,” Patriarch Kirill said as he held the Friday mass at the major Moscow memorial to those who fought in World War II. “This is the fight against the fearsome foe that is currently not only spreading evil through the Middle East but also threatening the whole of mankind.”

He added: “Today, we call this evil terrorism.”  Source