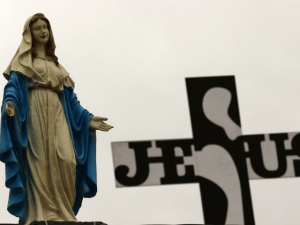 “A leading Egyptian cleric irked his Christian compatriots when he said on television that the Islamic figure Muhammed would marry the Virgin Mary in heaven. …The Quran said: ‘Allah will give [the Prophet] women preferable to his wives, Muslim, pious, pure women.’” One, he said, referred to Asiya and the other to Mary. Egypt’s Christian community was enraged by Galil’s remarks. The community’s youth movement issued a statement demanding an apology. The movement’s chairman, Nader Soubhi, said: “We Christians don’t recognize any aspect of the Virgin Mary except her sanctity, her purity and her virginity. The Virgin Mary will never lose any of these.” –Source

First and foremost, it wasn’t’ “Christians” that were enraged, it was Roman Catholics because Bible believing Christians know for a fact that Joseph consummated his marriage to Mary after she gave birth for in refusing to do so would mean they both lived in sin before all believers till death. When speaking of Joseph and his obedient act of consummation the Bible clearly says in Matthew 1:25, “And knew her not till she had brought forth her firstborn son: and he called his name JESUS.” The word “till” denotes he waited the proper period of time to consummate.   END_OF_DOCUMENT_TOKEN_TO_BE_REPLACED