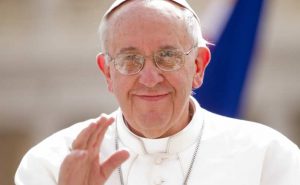 “Time/Fortune Global Forum 2016 announced that Pope Francis will give an address to their inaugural gathering of the world’s top 500 CEOs and Time magazine’s 100 most influential people. The unprecedented meeting will take place in Rome and the Vatican on December 2-3. The two-day conference will be capped by an address from the Holy Father, Time announced Tuesday. …With the motto “The 21st Century Challenge: Forging a New Social Compact,” CEOs from companies including IBM, Johnson & Johnson, McKinsey, PepsiCo, and Siemens as well as non-profit organizations, including the Rockefeller and Ford foundations will lead discussions aimed toward finding concrete solutions for problems of global health, food and water, energy, the environment, and financial inclusion to combat poverty on an international scale. The Rockefeller and Ford foundations have deep ties to Planned Parenthood and have supported efforts to spread abortion in other countries. It is not the first time the world’s rich and famous have been afforded unprecedented Vatican access. Forbes magazine revealed that the Sistine Chapel was rented out in 2014 to the Porsche company for a $10,000 a plate dinner and concert fundraiser. Last May, “The Edge,” guitar player for the Irish rock band U2, was invited to stage the first-ever rock concert in the Vatican’s Sistine Chapel. The concert was embedded in the framework of the Cellular Horizons Conference to combat cancer.” –Source

First and foremost, why is it Roman Catholics can’t see how this Pope and Pope’s of the past keep entertaining the most evil people in the world? They seem to enjoying rubbing shoulders with everyone from corrupt billionaires to Satanic Rock musicians like U2, Aerosmith, Ricky Martin and even Brittney Spears back in 2005 to name a few? Why is it this man of sin and every Pope before him can protect the priests that molest their children and lie to them from pulpits about Scripture and still the Catholic people remain seated? It’s because of what was penned in Isaiah 30:9-10, “That this is a rebellious people, lying children, children that will not hear the law of the LORD: Which say to the seers, See not; and to the prophets, Prophesy not unto us right things, speak unto us smooth things, prophesy deceits:”   END_OF_DOCUMENT_TOKEN_TO_BE_REPLACED