Coming soon: a meeting between Pope Francis and the Archbishop of Canterbury 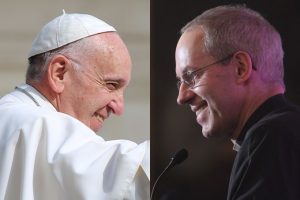 Pope Francis and Archbishop Justin Welby of Canterbury, the Primate of the Anglican Communion, will meet in Rome Oct. 5 to celebrate First Vespers in the Basilica of San Gregorio al Celio.

Although the meeting hasn’t been made official yet, the news was confirmed to CNA by a high ranking member of the Anglican Communion in Rome. Other sources have since confirmed that the meeting will be held Oct. 5.

While the schedule has yet to be completely defined, Pope Francis and Archbishop Welby are set to meet amid two busy days in Rome for the Anglican primate.

The two will celebrate First Vespers in San Gregorio al Celio Oct. 5. The next day they will have a private meeting that could signal a new phase in ecumenical relations.

Archbishop Welby will likely have a meeting at the Gregorian University and another at the Lay Center, an educational institution based in Rome. The Lay Center welcomes ecumenical students from other Christian churches and ecclesial communities, as well as those from non-Christian religions.

Archbishop Welby has already met with Pope Francis twice in the Vatican, the first time being June 14, 2013, and the second June 16, 2014.

The Archbishop of Canterbury’s visit to Rome falls at the climax of a journey that has witnessed the first Catholic celebration in 450 years at the Royal Chapel of Hampton Court – the Chapel that King Henry VIII confiscated from Cardinal Thomas Wolsey, who refused to declare annulled the king’s marriage with Catherine of Aragon.

The first report of a new meeting between the Pope and the Anglican primate came from one of the Camaldolese monks from the monastery associated with the San Gregorio al Cielo basilica.

The location of the papal meeting is highly significant given its historical context for the Anglican community.

Father Innocenzo Gargano, a former prior of the monastery, remarked on the visit during a May 19 event on Pope Francis’ encyclical “Laudato Si.”

The monk noted that the 1450-year-old San Gregorio al Celio had an important link to Britain. From there, Pope Gregory the Great sent the monk Augustine with 40 companions to evangelize the island.

If the meeting does take place as expected, it will be the fourth between a Pope and an Archbishop of Canterbury to take place in the Basilica San Gregorio al Celio.

Archbishop Welby is also expected to be a special guest at the World Day of Prayer for Peace held in Assisi Sept. 18-20.