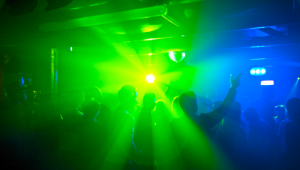 AUSTIN, TX—After a 12-hour, drug-fueled night of club hopping, local party girl Jenny Wilson suddenly came down off her high to realize she was just in the middle of a local church’s worship set Sunday morning.

According to sources, at around 8 a.m. Wilson had told an Uber driver to take her to The Gathering, a dance club downtown—but the driver instead dropped her off at a church with the same name, which was just beginning its early service. As Wilson saw the fog billowing out of the sanctuary and the laser lights dancing around the room, she figured she was in the right place and began getting her dance on.

“Gathering—are you ready to rock?” the worship leader yelled out to kick off the service, generating loud cheers from the audience—and especially from Wilson.

Congregants didn’t realize anything was amiss for some time, as Wilson’s wild dancing and trance-like state weren’t so different from most of the regulars in attendance.

“I just thought the Spirit had really, really baptized her this morning,” one audience member said afterward. “Not like the boring, run-of-the-mill baptism when you get saved, but like—really baptized.”

As the drugs began to wear off, Wilson reportedly noticed the stainless steel cross hanging from the rafters, and in a moment of terror, realized she was actually in a church service, causing her to bolt out the main doors. She then reportedly called another Uber driver to take her home.

“I was three sheets, for sure. But still, I can’t believe I didn’t realize I was in a church for so long,” she told reporters. “I’m just glad I finally saw that cross—otherwise I wouldn’t have been able to tell the place apart from my usual hangouts.”

“At least the DJ was on point,” she added.