Baptist Pastor: Stand for national anthem or be shot! 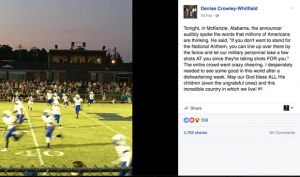 “If you don’t want to stand for the national anthem, you can line up over there by the fence and let our military personnel take a few shots at you since they’re taking shots for you,” the announcer said at the game versus Houston County High School, according to Facebook poster Denise Crowley-Whitfield. Crowley-Whitfield said the crowd went “crazy cheering” following the speech. The announcer was identified as Pastor Allen Joyner, of Sweet Home Baptist Church in McKenzie, according to Joyner’s relatives and friends, who also posted to Facebook and praised the statement.” –Source

If you look at the pic that I posted for the article on the left you will see that after echoing the pastor’s unChristian words, she said “I desperately needed to see some good in this world after a disheartening week.” What good is she talking about? A violent sporting event designed long ago to make violent acts against your fellow man appear not only good, but necessary when seeking some “time off” enjoying a game? Or was she talking about the pastor’s crazed comments about killing his fellow man for not standing during a national anthem? Or worse yet, was she talking about imagining lining up her friends and neighbors for a firing squad to kill them that refuse to stand for a national anthem?

If you saw my video posted back in June of 2011 titled “By beholding, most become killers” or my video posted in December of 2014 titled “Pay-per-view Executions” wherein a boxing promoter says it would be a money maker to have live executions on paid television; and all the judge can say on the program is “tough stuff;” this shows how well conditioned the people of the world have now become to help Rome enforce her mark.

If a pastor, the leader of a church filled with Christians sees no wrong in killing someone that refuses to stand during the playing of a song, then all the preachers of decades ago were 100% correct! Violent TV, music, sports and video games do in fact influence how we think. By beholding we really do become changed and this “pastor” confirms that hands down while standing at the desk sanctioning breaking commandment #6!

So many people think students of prophecy are crazy for claiming the Vatican will move the United States Government to pass Sunday laws that if disobeyed will not only make it impossible to buy or sell anything. And not too long after that when the weak ones are weeded out, they will actually pass a law wherein anyone that has the desire to do so can hunt down and kill their Sabbath keeping neighbors simply because they refuse to bow to the Pope. I am sure if this Baptist pastor refuses to repent for suggesting the same for those refusing to stand for a song, he will lead his church onto the front lawn of any obedient Christian he can find to kill them for Rome and the State.

Keep in mind when that day comes (and this pastor shows it’s coming quickly) that these very same people called us crazy decades ago when we said porn would be piped into homes for a small monthly fee, abortion would be legalized for any girl looking to keep her boyfriend, girlish figure or both, and homosexual marriage would be considered normal just to name a few. Our message like the truth of our God hasn’t changed. The only difference now is, some that laughed years ago are now seeing what we see. But not many of them because not all care.

Eventually the truth shared with 100% accuracy over the years will eventually hit its mark in the hearts with ample soil. But for the rest that declare real Christians who understand prophecy insane — keep cheering at the violent sporting events, keep screaming at the video game as you kill realistic people in HD, and keep squealing along with the demonic rock stars as they sing of hating Jesus and eventually YOU will be found worthy of death in the final plague as it falls upon all the wicked the world over. Not only will Christian prophecy be fulfilled, the God that wrote it will not be mocked!