Tom DeLay calls for ‘revolution for the Constitution’ 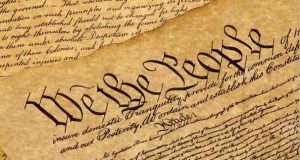 “What I want to see from the Trump administration is a focus on God and the Constitution,” DeLay told WND. “It’s pretty simple. The implementation is very difficult, but what I want to see is a bold understanding that faith is the core of this country and the Constitution is the core of our government.” The former majority leader calls for a revolution that will transform the very core of America in his brand new book “Revival! Revolution! Rebirth!” He assures Americans he does not want a violent revolution but a spiritual one, similar to the First Great Awakening of the 1730s and 1740s.” –Source

What DeLay wants really doesn’t matter. Civil war is coming to the USA no matter what. And it will be violent. So as I’ve said many times before, it is a good time to get out of the cities. Still, his other points will come to fruition as he hopes. His “Revival, Revolution and Rebirth” will happen but only as the Vatican’s version of Christianity seasons it. No getting around that as prophecy will be fulfilled. For Trump or any politician in the Pope’s hip pocket to do anything other than a Roman Catholic version of Christianity would be political if not physical suicide. (need I mention JFK?) What we will soon see is as I stated before; the left will adopt a politically seasoned religious tone so as to promote “another Jesus” to all the people. Thing is, nearly no one in America will have a problem with it because every single Protestant faith in the USA is already in bed with Rome and this includes the Seventh Day Adventist church in a huge pile of well documented statements.

And just so you know, DeLay’s desire for “Revival, Revolution and Rebirth” is a loaded statement. As we already see them peppering the once antiChristian media with new found “faith” wherein loads of pro-Christian talking points are flooding in, the so called revival and rebirth is a done deal as far as they’re concerned. All they need to do is make a few well-placed statements on the air and most of the sheeple will buy it hook, line and sinker. It’s the “revolution” that DeLay and his cohorts really want. Sure, they would love to do so without firing a shot. But watching how the left still display abject hatred for Christians, a Constitutional rewrite is soon to be advertised so as to please both sides. Will it be before or after the coming civil war? Or will it be the reason for the war? Only time will tell.

What Satan has planned and prophecy has confirmed is a worldly version of Christianity across the board. And thanks to the 501c3, of which every church has already bowed to in a cash slurping obedient frenzy since 1954, the prophesied Church & State image of the beast in Rome will become so visible that even those SDA’s currently laughing at the true remnant of her seed for exposing their prophesied snafu, will eventually let out an ecumenical gasp and realize they messed up big time. Religious laws will be lobbied from all the government approved pastors – aka “wolves”; and an atmosphere of hell spawn “Revival, Revolution and Rebirth” will come forth as DeLay hopes and every lukewarm Christian the world over will embrace it as if it is send from God Himself. And when that day comes, the true remnant of God will be the only ones that have a problem with it and THAT is the main crux of the matter and goal to their agenda.

What do I mean by that?

When all the so called religious laws come to fruition which are nothing more than Vatican dogma legalized; the remnant people will not embrace it. But everyone else in all the apostate churches will and we will be hated, ridiculed, declared fanatics and even cults for refusing to join their group hug. This is all besides the fact every one of our doctrines are backed up by actual Scripture and their doctrines can only be backed by doctrines of demons and traditions of men. Still, as prophesied we will be in their sights and as soon as everyone in America is happy and joyful in their Vatican contrived “Revival, Revolution and Rebirth”, the other Papal shoe will drop with a resounding blood stained thud and Sunday laws will be enforced. Are you ready for all that? ARE YOU SURE?