Yiannopoulos Could Be Fired by Breitbart Over Pedophilia Comments 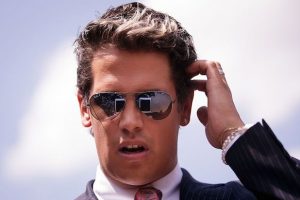 “According to the financial network “there is a fierce internal debate at Breitbart over whether he should remain with the website over his latest comments,” with some at the right-wing site telling Fox News that Yiannopoulos could be dismissed as early as end of the day Monday. Yiannopoulos was disinvited from Conservative Political Action Conference (CPAC) on Monday after a video of him talking about pedophilia resurfaced over the weekend. In it, Yiannopoulos can be heard saying that some relationships between adults and 13-year-olds are consensual and joking that his own experience as a victim of molestation made him good at ….” –Source

All I see here is yet another homosexual being used by Satan to further the Vatican’s homosexual/pro-child molestation agenda so as to help them normalize it as well as lower the dollar mounts on their astronomical amount of lawsuits. It is also apparent, as students of prophecy predicted, that pedophilia would be pushed in the media as soon as other perverted lifestyles were normalized. And just as expected we saw Hollywood and the US Courts pushing polygamy using the same methods they used to normalize homosexuality so as to bring that to a place of normality that led to the legalization of homosexual marriage which is a MAJOR sign of the end.

So be it! It’s not like we didn’t see this coming. But it still amazes me how easily Satan can use people in the main stream as willing an obedient pawns. Just as we saw for decades with strange innuendos being dropped in all the sitcoms, news reports and big screen movies; some people were moved by their dying god to sacrifice their careers simply because the timing was a bit off on their statements regarding pedophilia. Like this guy Milo, they thought their popularity made them immune to any backlash and so they were used by the demons directing their every move to test the waters to see how ready the American people were towards a pedophile mindset. While at the same time, allowed even more seeds of perverted decadence to spew out there knowing it will eventually hit some well fertilized sewage in the hearts of millions so as to assure someone else will eventually step up like Milo here to claim molesting an innocent little boy in the hopes of indoctrinating him into a homosexual lifestyle is not only moral, it should be legalized so as to assure the homosexual people continue to flourish. I mean, after all, homosexuals cannot have children. They can only exploit them. And so in their twisted reality they believe they must.