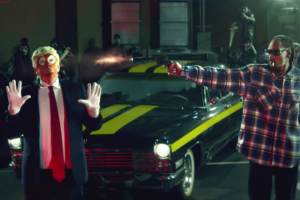 “Snoop Dogg stars in a new politically-charged music video that sees the rapper pull a gun on and “shoot” a parody clown version of President Donald Trump. Visuals for “Lavender,” a song that first appeared on BADBADNOTGOOD and Kaytranada’s IV, show a clown-faced President “Ronald Klump” holding a press conference where he announces a plan to “deport all dogs.”-Source

I would post some of the comments “Snoop Dogg” makes in the article but it’s one “F” word after another and the video, (please don’t watch it) it’s worse than the article. So why am I posting it? It’s the same thing over and over again in the lame stream media lately. All of them make failed comments about assassinating Trump and many of the professional liars in Hollywood (actors) which we all know are heavy into politics; I mean the politically fueled movies confirmed that decades ago; but many of them make open death threats to the president but have you noticed something strange about that? When Madonna says she wants to blow up the White House on camera before a large group of women, or Mickey Rourke threatens to literally kill Trump with a baseball bat during an interview outside a bar, yet none of these people end up behind bars? Hmmmmm

What if Trump is in on it and is actually working with them? It’s like I said before, everyone knows what will happen if Hollywood and the media get the American people into such a state that riots break out everywhere and civil war looms on the horizon so much so that it’s common sense martial law will be enforced. If that happens and it goes national they have to know Trump becomes dictator and all elections are suspended. And just so you know, that suspension will be permanent because who in their right mind thinks once the government gets new powers over the people that they will ever let go of them? Need I remind you of how the social security cards came into play? I still have my original one from my preteen years and it plainly says on the back “This card is not to be used for identification purposes” because a lot of uneducated preachers thought it would bring on the mark of the beast. After a few years of making sure everyone was numbered and had one in their wallet it become the law of the land and today, you cannot get a job, a credit card, a driver’s license, a mortgage or even a car without one.

In any event, when someone named “Snoop Dogg” makes videos using foul language, flashes guns and scantily clad women while smoking dope on screen speaks, how many educated Americans will really take him serious? Nary a one I would think. But how many sheeple will follow his lead? Literally millions, and that is what they’re counting on. Seriously, these rappers, singers and actors are literally called “gods” by many and their only claim to fame is that they sold their souls to Satan and use his native tongue (lies) to build multimillion empires. The sheeple that worship them and the dollars they heap up, even though those dollars are like ropes of sand in the hands of most, the deceived massed trust these Hollywood people only because they all desire to live vicariously through them. Pray for them and show them how amazing and peaceful it is to have the God of love living in you. You never know if the one you’re speaking to has grown tired of all the fear that men like “Snoop Dog” cultivate in the hearts of those that glorify death in every music video they make.

VIDEO: Students Support Religious Freedom for Muslims, Not Christians * Shariah, Canada-style: What you can’t say * He threatened to kill the president. Now he is seeking public office in Virginia * VIDEO: Doctor watched procedure on Youtube before (fatal) surgery, says lawsuit * Carbon dioxide not ‘primary contributor’ to global warming, EPA chief says * VIDEO: Huntington Beach Police Kill Homeless Man At Kids Soccer Practice * Female-Owned Bookstore Turns Books by Male Authors Backward for Women’s Month * Mom Busted in Alleged Attack on Woman, 71, With Victim’s Own Cane for Saying Her Child Needs Manners * FYI: VIDEO: “Alexa, are you connected to the CIA?” * Women Kicked Out of Women’s Shelter to Make Room for a ‘Transgender’ Man * Former Secret Service Agent Warns Trump ‘Not Secure’ in the White House * Experts: Obama blocked us from vote-fraud data * US nukes just got a lot deadlier — and experts say it could cause Russia to attack * Bus Runs Into Crowd in Haiti, Killing At Least 34