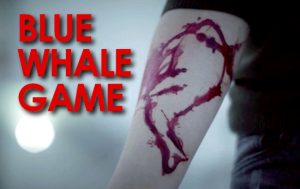 “The “Blue Whale” game has reportedly reached two high schools in Baldwin County, though officials wouldn’t confirm which ones.  News 5 is told some students have come forward regarding the game, though officials don’t believe any students have harmed themselves playing. According to research done by Snopes, the player signs up to follow an administrator’s tasks over the course of 50 days, which can include anything from cutting yourself to listening to a song. The player wins when they complete the final task, committing suicide, on the 50th day. Peer pressure is associated with the game through apps like Snapchat. Teenagers supposedly “tag” each other and challenge them to play. The student then downloads the Blue Whale app, which hacks into their personal information and cannot be deleted. The app originators then threaten the teenagers with harm to their families or releasing of personal information until they kill themselves.” –Source

I had a completely different article ready to post regarding the Vatican’s claims that the 666 in the Bible is wrong and it should be 616, (I posted a video on this yesterday evening) but the safety of our precious children is far more important, and so I tabled that post for now. And as you all know, especially if you saw my Homeschool Spurs page on the site, the United States Public School system is hands down the most dangerous organization known to man second only to the Vatican itself. They have been destroying the minds of our children for as long as they have been in existence. As Roman Catholic Emperor Adolph Hitler claimed during his rise to power, having mandated and even forced access (as we see now in the USA) to the minds of the children grants the ability to those in power to not only manipulate the vote within as little as 2 years (since the voting age changed to 18) to having the ability to create a new format for society whenever they please.

But that’s not the worst of it. As any student will tell you, and this includes 100% of them from the day of inception to today, school forces every young child to be placed in an environment where children write the rules when it comes to character formation. Now yes, every teacher will tell you they write the rules and that is partly true when it comes to forcing the children to believe in everything from evolution to homosexuality. But what I am talking about is how the children grow up in a literally society of children who rely heavily on peer pressure. It doesn’t matter to me that the teachers are present when you have 35 to 50 students under ONE teacher per classroom; you have the perfect brewing pot for Satan to manipulate the minds of each little child towards his evil way of thinking.

For example.. when I was in school I was a goody two shoes in my preteen years. (one of many pet names for me by bullies) As a young child I wanted to please God. But after a few years of being bullied I eventually succumbed to the temptation to be just as wicked as the other kids just to fit in and stop the bullying. Had I waited till I grew to 6’2″ I may not have delved in so deeply. But, little children scare easily. And even though my change occurred quickly, nary a teacher caught it because none of them knew what I was thinking or even going through. Basic reality is, they still have no clue to this day with any child under their tutelage. And this is why idiotic games like “Blue Whale” are so effective among the young. The children rarely tell the teacher what they think is “cool” among their peers because Satan has built in a distrust towards adults in the children for the most part and so it festers on until large numbers of students get hurt or even die. We’ve all seen it.

When I was a student in the 1960’s & 70’s, among other strange things, I saw the drug scene come into the schools without a single teacher being aware of what was going on at all. It wasn’t until later on in my teen years that I first saw the teachers mentioning it and not too long after police tackling teenagers in the school hallways and taking them off to jail kicking and screaming for dealing drugs to their friends in the school. But by then, the efforts of the police and teachers was totally inadequate because everyone I knew was already into the drug scene and we all had our clever little ways (thanks to demonic influence) on how to hide what we were up to and nothing could be done to stop it. We even got away with doing things during class no less right under the teachers noses and this included smoking everything besides tobacco and they still couldn’t catch us red-handed.

In other words, just as we see in prison life, when you only have a few teachers watching a few hundred kids, even if they have cameras all over the place they cannot effectively watch every single child at every single moment and the kids know it! Because even they can figure out ways to “work together” in their demon inspired society to get away with just about anything. This is why you never hear about the rapes and murders inside school classrooms and bathrooms until after it’s all said and done.

In short.. As I’ve said it so many times before, and I am sure I will say it many more times in the coming days. American schools are not a safe place for children!