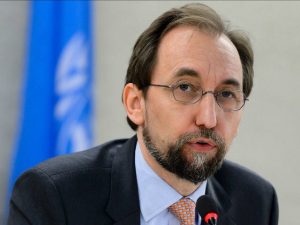 Now do you see why students of prophecy understood as we did during the Trump campaign when he and the Pope butted heads that is was nothing more than a negative propaganda campaign designed to pull the onus off the Pope and how he will still have complete control over US policy because prophecy will be fulfilled? And the fact Trump and His Roman Catholic wife met with the Pope in May and had nothing but praises for him shows it’s all politics. Nothing more nothing less.

And why do I bring the Pope in on this article that speaks of Trump’s desire to sanction the use of torture against terrorists? If you read my October 2007 Truth Provided Newsletter titled “Torture; a Vatican fingerprint” you will know what I mean. Torture was first brought into society by the Popes of Rome who used methods that are the exact same methods their brethren in Islam uses today. And that’s only because as prophesied, they are indeed bloodthirsty brothers. And if you want proof the torture methods we see Islam using today that are being broadcast far and wide as we speak (to cultivate fear) by the mainstream News lately, see Foxe’s Book of Martyrs for a gruesome account of how the Roman Catholic priests tortured and killed Christians who refused to worship the Pope during the prophesied great tribulation, or as most call it, the Inquisitions of Rome. If I was a betting man I would lay dollars to donuts you will not be able to finish reading that book! Rome is that evil and that bloodthirsty to where most moral souls among us cannot stomach their antics.

Trump is going to work with the Pope just as much as Hoover, Roosevelt, Truman, Eisenhower, Kennedy, Johnson, Nixon, Ford, Carter, Reagan, Bush, Clinton, Bush and Obama did after Rome’s wound started to scab over due the prophesied meeting with Mussolini in 1929. As prophesied the second beast (USA) will move everyone on earth to “worship the first beast” (The Vatican) and yes, the word “worship” also means to obey, and so this is why American politics are such a mess. That being said, does anyone know if there’s a website out there that has listed the facts regarding how every time the Pope visits a nation something very bad happens in those nations be it politically or economic within months of the Pope’s visit? I’ve noticed that happening after each visit over the past few decades but never thought to compile a list till now. If you know of such a site, email me the link when you have time.

And for those that think Trump and the Pope haven’t been working together all along; please explain the way Trump solidified Bush’s decision to help the 501c3 government pastors preach politically as well as lobby for religious laws with his signature on May 4? Within just a few weeks of that signature Al Gore started to “preach” about global warming (for the Pope) in such a way that he actually spoke of God in his political sermon! Had he mixed the church with the State on May 3rd he would have been in deep trouble. But as of May 4th, and thanks to Trump’s pen, he and any government approved pastor can preach for Rome just as Christian prophecy predicted long ago.

Since Trump has gone public more than a few times before and after his election about his lust for using torture, and since this is a historically proven fruit of the Roman Catholic Popes, and since prophecy says the Papal wound will be healed, which I share in a video back in January of 2014 that confirms that wound HAS been healed, which now also confirms religious laws will soon be on the books and since Christians have already been declared “terrorists” before by many anti-Christian political leaders, torture will once again be part of the Christian experience. But not to worry brothers and sisters. Just as we saw Huss singing as the Pope burned him at the stake, the obedient remnant people of God won’t Fear them which kill the body, but are not able to kill the soul. Instead we declare reverent fear and loved filled worship unto Him which is able to destroy both soul and body in hell. (See Matthew 10:28) And His name is KING JESUS!