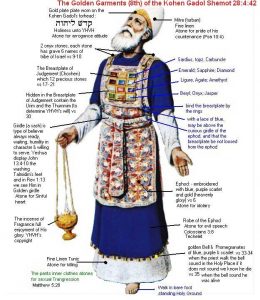 “For the first time in 2,000 years, a group of Kohanim (men of the Jewish priestly caste) living close to Jerusalem’s Old City are studying the relevant Jewish laws to be able to ascend the Temple Mount and enter the Holy of Holies, where God’s presence is said to dwell. …The “new situation on the ground” is that Kohanim, men descended patrilineally from Aaron the Priest, will now be trained for the first time in millennia to enter the area where the Holy of Holies once stood. Their purpose will not be to offer sacrifices or pray for the Jewish people, but to retrieve dead bodies should the need arise again. ” –Source

First and foremost, as any serious student of the Bible knows, rebuilding the temple, or even training Rabbis to officiate, be it for removing dead bodies in a sanctified manner from the temple mount after an attack by Muslims, or actually seeking to enter into the presence of the Lord above the ark is not biblical this side of Calvary; nor is it prophesied to happen at all. The only place we see a third temple mentioned in any format in history is in Jesuit propaganda and infiltrated Protestant hype. Nary a Bible verse can be presented to back it up.

The temple on earth has been vacant of the Lord’s presence for 2000 years for a reason. But as we know by watching the many strange Jesuit agendas being proclaimed by many Protestants today, most Christians actually alive believe a third temple is needed. Now do you see why it’s so important to stay in your Bible and do as the Bereans of old when checking out what the preacher says? The wolves masquerading as pastors and preachers have finally made it possible for the majority to believe the lies or Rome so as to allow Satan to set up his arrival as “Messiah” using both the Jews and the Vatican prelates worldwide.

By the way; seeing how we now know this is all happening as per Vatican agenda with this third temple folderol, one can now expect to see them shoring up their other false prophecy regarding a seven year trib that entails a fabricated peace treaty with a preplanned violation of that treaty in 3.5 years so as to claim Vatican prophecies are real to better CONvince the masses Satan really is their Messiah. Will they be able to go that far? Or is this and their other false prophecies merely a back up plan in case their work towards garnering souls for hell fail to work as Satan hopes. All of this depends solely on how long our Lord tarries. They truly have no say so in any of this because the Christian God is actually a God. And so, like the mudlsinger that hopes most of what he tosses sticks to the wall, the enemy of souls also has a backup plan. After all, he’s been working on this for 6000 years.

As students of prophecy, all we can see at this point is a valid reason for why they set up the false prophecies in the first place. Jesuit agenda is not trustworthy. It’s not like Christian prophecy wherein it’s 100% accurate to the letter. Rome can only makes plan and hope for the best. Or worst in this prophesied case. The Creator doesn’t grant them any insight into that which is written. Only the obedient bride of Christ knows what will happen next because our Lord reveals it to us. Rome can only make a hell inspired guess. Hence the prophetic mudslinging.

Now for a bit of a shock for those Christians that are dragging their feet on getting ready. Have you heard about the so called Messiah of the Jews that died in 1994 that they now say has recently resurrected? This Rabbi Menachem Mendel Schneerson is now being promoted as resurrected by many Jews. Compile that with all the signs of the end including the fact they are right now training priests to stand before the Lord (who won’t be there) in the Most Holy place, and you have the perfect storm of demonic deception that will garner billions of souls into Satan’s death camp. It’s exactly as Jesus prophesied in John 5:43. He said, “I am come in my Father’s name, and ye receive me not: if another shall come in his own name, him ye will receive.”

Soon Satan will stand on earth claiming to be Messiah to the Jews, Jesus Christ to the Christians, and Mahdi to the Muslims. That all being said.. are you ready? ARE YOU SURE???

Additional Articles Confirming we are in the Last Days:
Cannabis Grower Buys California Town to Build Pot-Friendly Outpost * Jeff Sessions Treads on the Property Rights of Americans * Study: Letting illegals stay costs 6 times more than deporting * VIDEO: GOP senator: I wish Republicans had stood up to birtherism * Terror? No: Knife-wielder at Eiffel Tower shouts ‘Allahu akbar’ * The global crackdown on parents who refuse vaccines for their kids has begun