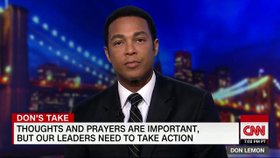 “So spare me the anti-religion tweets. You can keep them. I won’t even read them. I don’t care. These God-fearing Christians were in church. They were already praying. Thoughts and prayers did not stop an oversight from the justice system which enabled a guy who attacked his stepson and assaulted his wife from getting a gun.” –Source

I was wondering who in the media was going to fan the flames of the already burning Christian hate campaign, and now we know who. But then that was to be expected of the main stream media. And especially one like CNN that thrives on lies. After sharing repetitive statements regarding thoughts and prayers being offered up for the people that have been injured or who have lost loved ones in a few of the recent mass shootings. And yes, more than one of those shootings that CNN mentioned have been confirmed as false flag attacks that granted the powers that be the option to push ahead for even more unjust laws in America, this CNN anchor claims prayer didn’t help the already praying Christians that were killed in that church. And yes, this will fan the flames of hatred against anyone trusting the Christian God.

You know, it’s bad enough that the fake News media does all it can to attack anyone and everyone that doesn’t embrace the lies they offer as truth, be it a politician they disagree with or some strong Christian who wants to stand in obedience to the Creator God even when it’s not politically correct. But for CNN to create the narrative that the God of the Bible never answers any prayers when people are being killed by crazed gunmen is nothing more than an obvious setting of the stage for the people that actually trust these lying reporters to become even more hateful towards the God of the Bible and therefore against anyone that believes in Him.

Truth is, the Vatican and every God hating person the last 6000 years has always stepped up to make crazy claims that God wasn’t going to help His people whenever they flex their muscles against them, yet each time we have seen the hand of God move in mighty ways. And soon, everyone on this planet will see that again very soon. Because the basic reality is, we know Satan knows his time is short, and so he has to puff himself up. And just as Goliath did all he could to make David fearful, the Vatican controlled media is doing all they can to do the same as that great and dreadful day draws close.

When it comes to everything from good Christian morals to the God that outlines those morals in His holy book, just like Goliath of old, CNN mocks the God of the Bible by claiming He wasn’t there for His people. But then as prophecy predicted long ago, Satan has to form his Armageddon troops so as to encircle the obedient bride of Christ on that great and dreadful day with weapons in hand hoping to kill us off because #1, they actually believe the lies that all the disasters in the world are due to obedient Christians refusing to obey the Vatican puppets in the media that echo the demands of the Pope who claims keeping Sunday holy will stop the disasters. And #2, they think the God of the Bible won’t stop them or even protect the Christians they lay down on guillotines. And so the only way to get everyone on the same page is to get Bible believing Christians hated more and more, and so this is why we see reporters like this claiming our God refuses to answer prayer. It puffs up the hearts already being conditioned to kill as we speak.

Now if you compile this reporter’s antiChristian comments with all the violent movies from the Hollywood his station promotes, all the violent video games advertised during his network’s prime time commercial spots, the crazed and satanic music spewing everywhere you go in society, the legalized mind altering substances to cripple and confuse billions, all the violent sports and Pagan rituals sanctioned by all the churchesthat Rome has known since 321AD is their way of uplifting Satan above the God of the bible and you know exactly why the false flag and actual attacks keep happening over and over again. They need to keep the blood sacrifice to their dying god flowing and they need to keep religion in the spotlight as the main reason for it all. This is why they keep claiming ISIS is a religion and this is why Christians are targeted. This is something prophecy says they have been building towards at a rapid pace for literally decades. And CNN’s fake News media is just one more method used by the enemy of souls to assure many souls never make it to Heaven to be with the God that does in fact answer prayer.