I left my Fallen Church – Now What? 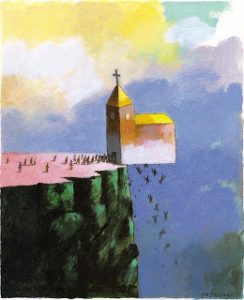 I have been asked this question many times over the years and especially after I created RemnantofGod.org and my sister site years later at SDAapostasy.org. The question is always the same from every obedient child of God. “Now that I obeyed the Lord and left the church that I know now is in open apostasy, what do I do now?

My answer is always the same.

What did the Jews do when they came out of the fallen Synagogues 2000 years ago? They all started churches in their homes. Notice the following verses.

If you look closely you will see there’s actually two good reasons for starting a church in your home. First and foremost real Christians can only “follow the Lamb withersoever He goeth” (Revelation 14:4) and so all the believing Jews started churches in their homes so as to please the Lord and blessing their families. The other reason many came out of the fallen Synagogues was twofold. #1, most were cast out for mentioning Jesus Christ and His truth in the Synagogue. And #2, many sought the peace and love found in the home churches. The hatred and persecution of Christians was very apparent in the Synagogues.

Now that we are in the last days we see a repeat of the same movement of the Lord. Truth is, as students of prophecy most of us already knew that since the churches were moved by the Lord to start in the homes 2000 years ago to both bless the obedient people of God as well as protect them from persecution; in the last days the people of God will also start churches in their homes for the same exact reasons.

All the home churches of 2000 years ago and today have begun because obedient Christians with an undying love of the Lord must follow the Lamb withersoever He goeth just as prophecy predicted they would, and since all the churches asked Jesus to leave long ago by preaching all sorts of Pagan traditions and doctrines of demons, the home church movement has grown as expected.

Another positive aspect of the home church is that Jesuits can’t easily infiltrate them due to their small sizes. A few families gathering on Sabbath each week can easily discern the presence of an evil infiltrator much quicker than they can in a large brick and mortar church wherein Satan has many distractions deep within.

For those not near a home church at present, or if you are unsure about starting a home church in your area, we can help you either start a church or find one church near your home. Until we do, you are all welcome to join us online as we freely broadcast our home church service live each Sabbath using an online audio conference, an Internet radio station and a teleconference service. Click here for more information on how to gather with us on Sabbath day.