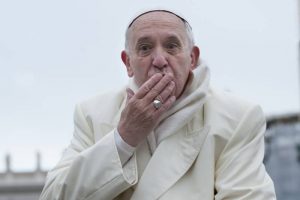 Well that is par for the course for the man of sin in Rome. In fact, as we know every Pope since day one has lied about everything from child molestation to what they call Christian doctrine; but with this Pope, who is in fact a Jesuit, lying is something that comes naturally. And no, I do not say that to be sarcastic or insulting in any way shape or form. The well documented and published Jesuit oath confirms this is what they must do as it shows how they promise to lie to every single denomination they infiltrate so as to move Vatican dogma into the churches they invade. They actually do so by acting as if they are newly installed church leaders of the same faith. As a Jesuit that is their main duty.

Being the very last days bold and obvious types of exposure like this was prophesied to be the norm. I mean you have to know when a God of truth declares the man of sin will be revealed, he will most assuredly be revealed. Christian prophecy is that accurate! Yes, students of prophecy have known all about these evil men in the Vatican for literally centuries and many like myself have been very vocal about this the last few decades. But due to the nearness of our Lord’s return it has become obvious that even the common man knows who the man of sin is now.  As prophesied in Revelation 12;12, the dying god of this world, or Satan as most know him by, he knows he has no time to bother with deep seated coverups anymore. And thanks to well documented historic facts that have piled so high that it can never again be hidden, we all now know that the man of sin has and always will be the Popes of the Roman Catholic church.

Revelation 21:8, “But the fearful, and unbelieving, and the abominable, and murderers, and whoremongers, and sorcerers, and idolaters, and all liars, shall have their part in the lake which burneth with fire and brimstone: which is the second death.”