The NIV is a FAKE Bible 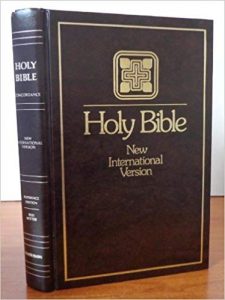 So far I have found there are over 2000 verses missing or re-written in the NIV Bible. That’s just over 64000 words missing in that Bible. And countless more verses have been re-written in the NIV. I cannot effectively show all of them here, but I do have a page on my site located here that I used in a sermon decades ago that caused 100% of the people in the church to forever put down their NIV Bibles. That sermon was over 45 minutes long and even that was nowhere near as much time as I needed to expose this corrupt Bible. And so I will not be showing all the verses here. I will however show three verses that are missing to give you an idea as to why they did this.

This first verse is my favorite one to share on the street that openly proves the Vatican is behind the re-writing of the Bibles. Everyone I show this to were shocked because they all knew it was a Vatican fingerprint in a big way. If you know your history, you know about Rome’s hatred of the Word of God in that they openly declare their hatred for it in writing to the point of declaring it to be “a poisoner of souls” in the Contemporary Review of April, 1894 on page 576.

Worse yet, for centuries they killed and tortured millions of obedient Christians simply because they had a Bible. Now that more civilized times (if you can believe it) have come upon us, the Popes know they can’t just openly walk into your town and burn you at the stake to scare your neighbors into bowing to the Pope in worship. And so they decided rather to unchain the Bible from their pulpits and offer the people their edited version to try and hide the truth about their extreme antichristian ways.

Acts 8:36-38 (NIV)
36, “As they traveled along the road, they came to some water and the eunuch said, “Look, here is water. What can stand in the way of my being baptized?” [37] 38, And he gave orders to stop the chariot. Then both Philip and the eunuch went down into the water and Philip baptized him.”

Did you notice verse 37 is missing? In the original NIV published in 1978 both the number and the verse is missing. Later, due to numerous complaints from Christians, they placed the number back in, but not the verse. They opted rather to just post a footnote at the bottom of the page in very small print suggesting that some manuscripts included the verse. Truth is, all manuscripts included it and so they lied and worded it in such a way so as to make many assume it was not needed since other Bibles took it out when in fact they never did.

Now notice the KJV Bible that is especially hated by Rome because not only are all the verses still intact, the original preface of the 1611 KJV Bible, which I have posted on my site here, openly expose the Popes of Rome as being quite evil.

The reason verse 37 is missing in the NIV is because the Roman Catholic church baptizes babies in the exact same way the Pagans of old did. And since a baby cannot publicly proclaim Jesus Christ is Lord so as to confirm to the one baptizing him that they have repented of their sins and have chosen to walk with Jesus in life and are therefore worthy to be baptized, the Vatican chose to remove that verse to keep their Pagan dogma intact and well hidden from prying eyes. Now notice this next verse.

Now that sounds all well and good doesn’t it? But there is something missing here that if known will further move the child of God to strive harder in their walk with the Lord so as to gain the perfection in Christ promised unto them if obedient. Notice the same verse in the KJV Bible.

Yes, as the NIV stated if read in context, the man of God can be thoroughly equipped if they read and trust the Word of God. But they purposely leave out the word “perfect” here because in so doing makes some Christians believe they can never attain to perfection this side of eternity even though the Bible says otherwise in many verses. Notice what Jesus says in Matthew 5:48. He says, “Be ye therefore perfect, even as your Father which is in heaven is perfect.” To remove the word perfect in 2 Timothy 3:17 is to either declare the Bible contradicts itself or worst yet, Jesus Christ is lying about perfection.

The many wolves on pulpits today claim that perfection only comes after we gain and then stand in Heaven. If that’s true then why was Genesis 17:1 written that says, “And when Abram was ninety years old and nine, the LORD appeared to Abram, and said unto him, I am the Almighty God; walk before me, and be thou perfect.” That was declared to him BEFORE Abram even became Abraham. And because of his perfect walk, he was blessed with that perfection and his name was changed. And just so you know, if you search for the word “perfect” in the NIV it only comes up 42 times. But that same word appears 94 times in the KJV. Now notice this.

But the KJV says;

The NIV removed the word “righteousness” here for the same reason they removed “perfect” in 52 other verses because removing it prevents the Bible student from ever knowing he or she can actually attain to righteousness in Christ. Worse yet, they replaced the word “righteousness” with “prosperity” in this verse so as to cultivate money worship and so now you see why all the prosperity preachers prefer the NIV when they make merchandise of their people. It lends credence to their so called prosperity Gospel.

Again, I only shared three verses out of thousands missing in the NIV. And if you check out which verses are missing, you will see why so many people believe in a secret rapture, seven year tribulation, infant baptism, eternal life in hell, Sunday Sabbath and a host of other doctrines of demons and traditions of man.