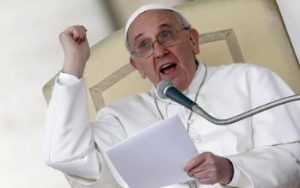 Today’s blog entry is a video of the Pope posted by Rome Reports a few moments ago, and as usual they have next to nothing in the way of comments regarding the video itself. And so I will just share quickly as to what he said in the video and what he actually meant by what he said, as per Vatican record.

In the video he declared, and I quote “The Christian is called to commit himself concretely to human and social realities without opposing ‘God’ and ‘Caesar.'” And so who does this and every Pope believe to be the God he is speaking of here that the common man must never oppose? And who is it he believes to be Caesar? Well first of all, as we know by many Vatican quotes, the Popes of Rome actually declare themselves to be “God on earth.”   END_OF_DOCUMENT_TOKEN_TO_BE_REPLACED