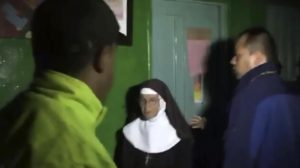 This has been going on since the Catholic church started. In fact they admit this in their ancient “Didache documents!” And so nothing has changed with this church. In fact, the Roman Catholic priesthood is 98% homosexual, when the AIDS crisis was at its peak Catholic priests were dying of AIDS 11 times greater than anyone else, that same priesthood killed hundreds of millions of Christians during the prophesied great tribulation Jesus spoke of, they often condone acts of blasphemy and debauchery, they teach their people to bloody their own bodies to satisfy their long prophesied blood lust, they build hospitals so as to kill the innocent children by legalized abortion, the Pope openly honors pro-abortion activists on camera, they molest the children of the families that attend their churches, when they get too violent with their child victims they bury them in mass graves on church grounds, they worship Satan inside Vatican walls, they even erect buildings in honor of Satan himself, they join hands with Islam to kill more Christians who actually salute the Popes on camera, they promote and puff up Nazi killers like Roman Catholic Emperor Adolph Hitler who killed anyone who was Jewish, black or real Christians and now they are once again caught red-handed torturing little children to satisfy their demon inspired hatred of the innocent lives that have been placed in their care.   END_OF_DOCUMENT_TOKEN_TO_BE_REPLACED