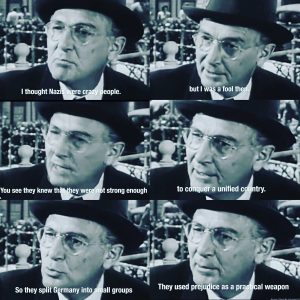 “According to Business Insider, the video – called “Don’t Be A Sucker” – was produced by the U.S. War Department in 1943 and re-released after the end of World War II.The video opens by discussing a man named Mike who has “got everything.” –Source

YOU NEED TO WATCH THIS VIDEO. The first video is 17 minutes long and I didn’t watch it. Although I assume it will be well worth the viewing; but I only watched the second one first as it was posted as an advert off a different article I was originally reading this morning as I was scanning for articles worthy of posting to the blog. It took me a while to find the original 2 minute clip as it appears to be well hidden online regardless of the fact they said it went viral. But I’m glad I did finally find it so as to post it here.   END_OF_DOCUMENT_TOKEN_TO_BE_REPLACED