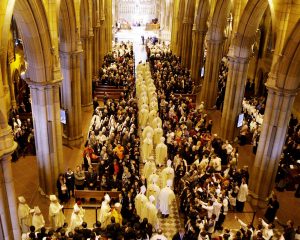 Seven percent of Catholic priests in Australia between 1950 and 2010 allegedly sexually abused children, according to data provided by church authorities in a major investigation.

The findings were released by The Royal Commission into Institutional Responses to Child Sexual Abuse, which launched in 2013 to look at child abuse in places like schools and government organizations.

It started surveying church authorities shortly afterward, in response to the high number of survivors who told the commission they were abused at a Catholic Church institution.   END_OF_DOCUMENT_TOKEN_TO_BE_REPLACED