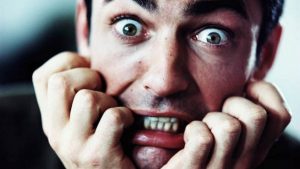 How many of us have seen the FEMA camp videos wherein the one making the video always claims to have proof from multiple sources yet never once do they share a single valid source? And so my obvious question is; why are people so fearful about such invalidated claims? No I’m saying all of the videos are false. Many are, but not all and anyone with brains knows the government is corrupt and most Christians know the mark is about to be enforced. But I am saying the fear cultivated by those videos as well as the fear of the mark is in fact generated by Satan. In fact, it was prophesied to be this way right before the end. Biblical reality is, Satan is the most fearful being in the Universe. Not only does he flee in terror when an obedient Christian demands he get away from them, he knows his time is short wherein he will soon die in a very graphic manner. And so anyone bowing to his lies will become just as fearful because the one you emulate is the one you trust.  END_OF_DOCUMENT_TOKEN_TO_BE_REPLACED