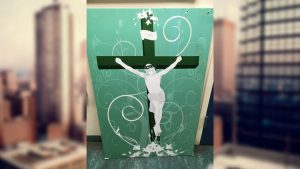 “Police on Long Island are investigating after someone hung a large painting of Jesus Christ on a fence at a mosque early Friday evening. Investigators are treating the incident as a hate crime, reports NBC New York. The painting is a crucifixion scene showing a largely silhouetted Jesus with his crown of thorns prominently featured. It appeared outside the Hillside Islamic Center in Nassau County, according to investigators.” –Source

Ok, let’s look at the facts here for a moment to see if we can discover who was actually behind this painting of “Jesus” ending up on that fence wherein they knew it would anger some Muslims. We have to look at all the facts because this is not just a religious statement being made here. It’s also a political statement thanks to how Rome got their foot in the door back in 1929, and as far as prophetic license will allow, it’s also an obvious act of war. Truth is, we all know about how much Muslims hate Christians. So much so they are averaging killing one Christian every two minutes all around the world.   END_OF_DOCUMENT_TOKEN_TO_BE_REPLACED