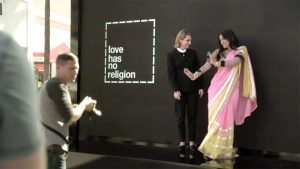 “The National Football League partnered with The Ad Council and R/GA to promote its “Love Has No Labels” campaign from the Pro Bowl in Orlando, FL. The ad shows the “kiss cam” from the January all-star game with various types of couples kissing. One of the women featured in the ad is a survivor of a shooting last year at Orlando’s Pulse Nightclub.” –Source

The video starts off panning the crowd with a heart outline on the screen. You know, the infamous “kiss cam” wherein people are pressured to kiss on camera before millions of people. As students of prophecy, it wasn’t a hard call to declare this wouldn’t end well years ago when this began as the norm at most sporting events. In the early days, open signs of affection outside of holding hands or a gentle smile were forbidden as it was obvious where it would lead if left unchecked. And so here you have it. But no one cares now that all those “prudes” are dead and gone.   END_OF_DOCUMENT_TOKEN_TO_BE_REPLACED