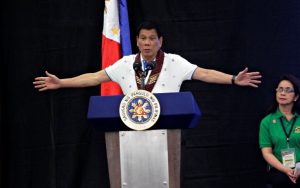 Rodrigo Duterte is well-known for his stinging outbursts and even US President Barack Obama has borne the brunt of more than one attack.

But his latest tirade shows that not even religious leaders are exempt from stern rebukes issued by the Filipino president after he called members of the clergy “sons of whores”. Duterte also fixed his gaze on Davao Archbishop Fernando Capalla, who expressed concern over the deadly war on drugs.

Since Duterte came took office in June, more than 3,600 people have died in drug-related deaths. Despite a steadily rising bodycount, Duterte managed to achieve a 76% satisfaction rating in a survey released last week.   END_OF_DOCUMENT_TOKEN_TO_BE_REPLACED