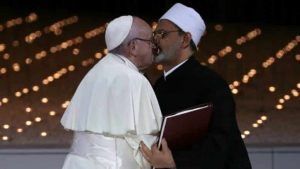 “A historic interfaith covenant was signed in the Middle East on Monday, and the mainstream media in the United States has been almost entirely silent about it. Sheikh Ahmed al-Tayeb is considered to be the most important imam in Sunni Islam, and he arrived at the signing ceremony in Abu Dhabi with Pope Francis “hand-in-hand in a symbol of interfaith brotherhood”. But this wasn’t just a ceremony for Catholics and Muslims. According to a British news source, the signing of this covenant was done “in front of a global audience of religious leaders from Christianity, Islam, Judaism and other faiths. –Source (Also see this on the Vatican Website And this article titled Prophecy fulfilled: Pope & top imam sign agreement)

Yes, students of prophecy have known about this One World church for decades now. In fact I had a Newsletter on this back in July of 2000 when they finally made the one world church official with the Pope at the head of it. And so we knew this was to be expected. But, when I look back at all the steps it took to get the Pope and the leader of the Islamic faith kissing on camera, those that know how to connect the dots can do so regarding why the Vatican is doing all it can to make the church look good in the media by reporting things like Pope Francis Admitting Nuns Were Used as “Sex Slaves” by Priests and Bishops. He did this to set the stage for what’s coming NEXT!   END_OF_DOCUMENT_TOKEN_TO_BE_REPLACED