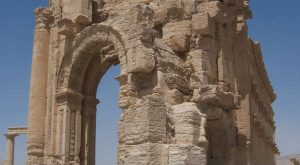 Do you remember all of the buzz about the arch from the Temple of Baal that was supposed to go up in Times Square back in April? Well, that project was ultimately canceled, but now it has been resurrected in a new form. In April a reproduction of a different arch, the Arch of Triumph, was erected in Trafalgar Square in London, and now another reproduction of that famous arch will be going up in New York City on September 19. This particular arch is not the same one that once stood directly in front of the Temple of Baal in Syria. Rather, the Arch of Triumph was constructed at a later date by the Romans, and it served to link the main street of the Colonnade with the Temple. So there is still definitely a connection with the Temple of Baal, but it is not as direct as had originally been envisioned.   END_OF_DOCUMENT_TOKEN_TO_BE_REPLACED