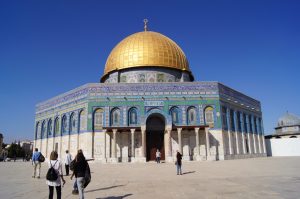 “Put simply, the scholars at our conference never doubted nor disputed that there had been a Jewish Temple on today’s Har Habayis in antiquity, up until 70 CE. Rather, they argued consistently, with no exception, that the religious traditions and texts of Judaism, Christianity and Islam solidly recognize this reality.” –Source

“First and foremost, for WorldNetDaily to post a PDF file from a Jewish Professor who most likely sets the stage for the Jesuit theology about a 7 year tribulation is in fact par for the course for WND. The only reason I use them on a regular basis is that they tend to have somewhat of a Christian slant to their reporting which allows for better sources on some articles, and combating their false theology regarding a secret rapture to an Islamic Antichrist is child’s play in the hands of any obedient student of Bible prophecy because being obedient means the Author of those prophetic facts will reveal the truth unto us. But, the only reason I post this article about Jews, Christians and Muslims supposedly agreeing on the Temple location is because of the timing of it all. What I mean is, any student of prophecy can tell you they are starting these talking points just prior to religious laws being legalized in the USA. This all plays into the long declared agenda of Jesuits regarding a nonbiblical seven year tribulation which if successful in pulling they will no doubt make plans to disrupt within 3.5 years so as to make their agendas appear prophetic.   END_OF_DOCUMENT_TOKEN_TO_BE_REPLACED