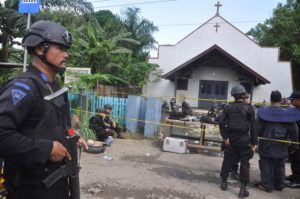 The parents of a 4-year-old girl, who suffered severe burns in a terror attack on a church in Indonesia’s East Kalimantan province, have forgiven the accused, identified as a former convicted terrorist linked to the Islamic State group, and have said they will not even ask God to punish him.

A bomb, reportedly a molotov cocktail, was thrown inside the Gereja Oikumene Church compound in Samarinda, East Kalimantan, where children were playing, on Sunday, killing a toddler and injuring three other infants, The Jakarta Post reported.