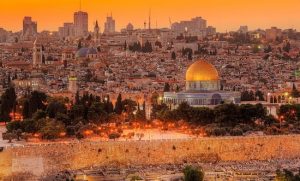 “Friday on CNN’s “New Day,” New York Times columnist Thomas Friedman criticized President-elect Donald Trump’s pick for U.S. ambassador to Israel David Friedman. Among the complaints Thomas Friedman had about the pick was David Friedman support of moving the U.S. embassy in Israel from Tel Aviv to Jerusalem. Such a gesture would upset many of the actors in the Middle East according to Thomas Friedman.” –Source

First of all I hate this when news reporters do this; but at least here we have somewhat of a confirmation of facts. What I mean is, notice how the reporter states right off in the video that the issue at hand has to do with “moving the Capital to Jerusalem.” They didn’t show previous comments and they certainly never repeated that statement throughout the clip. And then we see the comments that follow are all about moving the American Embassy to Jerusalem.   END_OF_DOCUMENT_TOKEN_TO_BE_REPLACED

Recep Tayyip Erdogan maneuvered to force out Turkish Prime Minister Ahmet Davutoglu, demonstrating that the powerful president does not need the strong executive presidency he seeks since he already wields almost absolute power.

This is the latest sign that Erdogan has consolidated power to such an extent that he can do almost anything he wants. He and his AK Party are working to Islamize the state and its foreign policy all the while continuing to crack down on the media and purge members of the judiciary and police.  Source