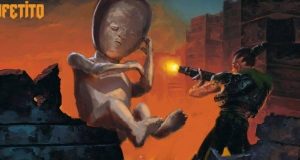 What is this world coming to? -AN END!-   END_OF_DOCUMENT_TOKEN_TO_BE_REPLACED