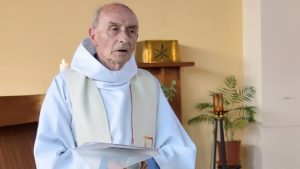 “In a gesture of solidarity following the gruesome killing of a French priest, Muslims on Sunday attended Catholic Mass in churches and cathedrals across France and beyond. Reporters on the scene said that between 100 and 200 Muslims gathered at the towering Gothic cathedral in Rouen, only a few miles from Saint-Etienne-du-Rouvray, where the 85-year-old Rev. Jacques Hamel was killed by two teenage attackers on Tuesday. “We’re very touched,” Archbishop Dominique Lebrun told broadcaster BFMTV. “It’s an important gesture of fraternity . They’ve told us, and I think they’re sincere, that it’s not Islam which killed Jacques Hamel.” –Source

But it was Islam that killed that priest! But as we know, Satan uses lies and fear to his advantage very easily today in the age of lying. His main hub of organization is in fact the Roman Catholic Vat of sin. This we have no doubt on because of thehistoric facts that match perfectly with Christian prophecy. We also know they need to make the quickly growing (and well placed) Muslim community look less dangerous and bloodthirsty while at the same time continue on with killings all over the globe to do so.

You shouldn’t be. What I mean by what I just said about using death to make them look better is in fact true. But in this case it’s “targeted” deaths. Or actual sacrifices “for the cause.” That priest died at the hands of Muslims who were indoctrinated by the Vatican inspired Koran who actually think the Catholic church is a Christian church simply because the bloodiest man on earth says it is. (That being the Pope of course) And so, as we see in any crazed agenda, you will have the passive element within its midst so as to offset the truth and cultivate confusion. The word “Babylon” is defined in prophecy as “to mix” truth with error. And as the prophet Daniel warned long ago, the Popes of Rome will be quite crafty in that respect. Hence those that were fearful that Catholics (who are not defined as Christians in Scripture) would actually attack their Muslim neighbors in the area because of that their obedient, or as the media calls them “extremist” Muslim cohorts did to the priest. And so to make them look better, which is a win win for Rome, the Vatican targets the priest as one who will die, as per the oath he took to become a priest, so as to have his death cultivate a mindset in the passive Muslims in the area to flock into the churches acting as if they want to be one with the Catholics. And all they needed was a little bit of fear to get this to work.

As I already stated, the prophet Daniel was clearly told to declare in his writings that the Popes of Rome would use craft to assure their agenda is met. (See Daniel 8:25) And this has to be one of the more crafty means as of lately. In short.. they need to make the Muslims appear worthy of embrace and so they get some obedient Muslims to kill the priest so the passive Muslims who have yet decided to obey their Koran to the letter clamor to the church to prevent their own deaths from angry Catholics. Fear works well when you have no faith in Christ be the person a lukewarm Christian or a card carrying Muslim because it is written in 2 Timothy 1:7, “For God hath not given us the spirit of fear; but of power, and of love, and of a sound mind.”

That passage declares if you have fear, it is not from the Lord Jesus Christ. And since it’s not from the Lord, we then know it is from His enemy. The Muslims may think Christians fear them; but their own videos confirm Christians are not afraid to die for their faith because Jesus Himself said in Matthew 10:28 that we should not “fear not them which kill the body, but are not able to kill the soul: but rather fear him which is able to destroy both soul and body in hell.” Christians know this life is only a test. If killed we know we will get up again.

That all being said. Ever notice this? Muslims obviously use fear tactics to try and get people to join their number. Many scoff when I say we have proof the Vatican wrote the Koran. But besides all the obvious similarities between the Muslim and Catholic religions I have listed here that confirms they came from the same author and it was not the Lord thy God; check out the following videos wherein Catholics use fear tactics to force people to either join or stay in their churches.