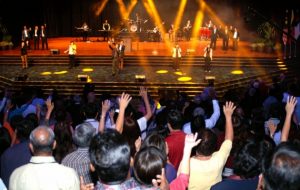 Pope Francis met with a group of Italian Pentecostal pastors Sept. 8, telling them that unity is achieved by walking patiently together.

In São Paulo, Brazil, on Sept. 7, Rev. Olav Fykse Tveit, general secretary of the World Council of Churches spoke about climate change during the opening day of the 24th Pentecostal World Conference.

“We all sin against the Holy Spirit if we ignore climate change,” said Rev. Tveit.

The encounters between the head of the Catholic Church and the leader of the WCC which represents mainly Anglican, Orthodox and traditional Protestant churches comes at time of greater ecumenical contact across the board.

In Rome, the seven Pentecostal pastors, led by Evangelical Church of Reconciliation in Caserta, Italy, the Pope’s friend from his days in Buenos Aires, Evangelical Pastor Giovanni Traettino had a private audience in Francis’ digs in Casa Santa Marta.

It continues the dialogue begun by the pontiff’s visit to their community in Caserta two years ago, Vatican Radio reported.

During the informal encounter Pastor Traettino thanked Francis for his role “as a brother and an ally” in accelerating the dialogue between Catholics and Pentecostals.

Pope Francis replied that he “felt in his heart” the need to undertake steps towards reconciliation, citing the examples of his meeting with the Waldensian community or with the Russian Orthodox Patriarch Kirill.

Unity, he said, is achieved step by step, through a patient and continuous journey together. Full unity, he said, will be achieved after “the Son of Man returns” but in the meantime, he stressed, Christians must pray, repent of their sins and walk together.

Tveit said in his Buenos Aires message, “We have to remind ourselves that the Holy Spirit is the life-giver, active in creation from the very beginning till today. The Holy Spirit sustain us and all creatures every day.”

“The world desperately needs people like you who believe in the transformative power of the Holy Spirit to invest in the future of the world for our children”, he noted, said the WCC in a statement.

“As Pentecostals believing in the power of the Holy Spirit, I will invite you to receive the invitation issued by the Ecumenical Patriarch, Pope Francis, the general secretary of the WCC and other ecumenical leaders to pray and care for God’s creation”, said Tveit.

Tveit was at the Pentecostal World Fellowship dinner, where he was invited by Rev. Prince Guneratnam, chairman of the PWF, to bring greetings.

“You have as Pentecostals been brave in your preaching that the Gospel of Jesus Christ is a transformative message. You have been strongly emphasizing that our faith is also to hope for more than what we can see just now,” said Tveit.

Like the PWF, the WCC was founded after World War II. For the past 15 years the WCC has maintained a platform for dialogue with Pentecostals.

“The joint consultative group has helped nurture our growing together in Christ. It will continue in the years ahead, examining how the Holy Spirit is working in the church to form disciples that transform the world,” said Tveit.