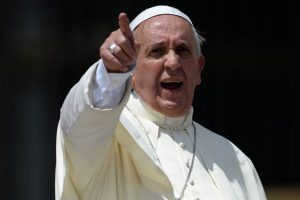 “Green Sabbath is a non-religious, non-political, and non-profit campaign which aims to raise awareness and to encourage people to help slow climate change, preserve precious natural resources and improve planet health by observing at least one carbon footprint-free day each week–on any day of the week. We call it symbolically A Green Sabbath day. GreenSabbath.org” –Source

A brother in the faith found this page on the wayback machine and so the source links will be sloooow. For those unaware, the wayback machine is an Internet archiver created by the creators of Alexa that keep on file screenshots of old archived versions of websites. The reason this website’s data (Green Sabbath) is being displayed via that archive is because the site is no longer up and active. However, the agenda is very much alive as I prove on my Sabbath Attack page. And I do believe the main reason the site is down is because it was making students of prophecy and our message look way too good and believable for them to leave them up for all those years.

Reason being is, we have been saying for decades what the original students started saying for well over 100 years ago. And so, to have a “GreenSabbath.org” page would declare our message CONFIRMED in the eyes, minds, ears and hearts of many people. And so.. they pulled the site.

If you type in GreenSabbath.org into any browser, it does not come up 100% dead. What I mean is, if you type in a bogus website address that has died off years ago, you get a “404 error” or a “This site can’t be reached” error depending on whatever browser you use. But the GreenSabbath.org site comes up 100% blank! Worse yet, if you go to www.whois.com to search out if the page is owned by someone you will get they are still owned and paid for by someone. But, they paid for a “privacy” service to keep their name hidden and so that means the blank page is actually an index page to a normal site. Only difference is, unlike my or any other website that is public, they have the entire page blanked out.

To further confirm GreenSabbath is still owned by “someone” type in any bogue site name into www.whois.com and see what I mean. I typed in “gfjdjgfdjgd.org” and it comes up “gfjdjgfdjgd.org is available!” Which means no one owns “gfjdjgfdjgd.org.” But then who would? But if you type in “GreenSabbath.org” all sorts of data comes up about the privacy service that was paid to keep the site’s info hidden.

Now they purposely stated on paragraph one of the summary of their site that I posted above that “Green Sabbath is a non-religious, non-political, and non-profit campaign.” Yet every student of prophecy knows it is prophesied to be a religio/political movement of the Vatican. Therefore, they are actually lying when they say it is not religious or political. Truth is, they also lie when they say they are non-profit because the only thing that does move the powers that be to enforce these long prophesied laws is in fact money. So.. they can lie all they like. We have well over a century of truth from the Word of God and historic documentation showing people it is a religious and political agenda that will be used to bring about the mark of the beast!

I just wonder how long it will be before the “GreenSabbath.org” site goes back online. Reason I believe they will return is twofold. #1, if they had no intention of coming back into the public eye, why keep the domain active? And #2, the prophecy clearly states the Pope in Rome will use “climate change” as a way to get all nations in bed with her. Truth is, we saw that come to fruition last year. SO as some author stated back in the 1980’s, the “green Nazis” of Rome will soon use their power to force everyone everywhere to do as they command so as to “save the planet” and a “Green Sabbath” or “Sunday Laws” is what the Lord that wrote the Bible says they will do.