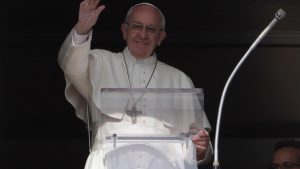 Pope Francis is giving marching orders to members of his Jesuit order and their new superior. He wants them to go to the “peripheries” to serve freely and obediently.

Francis slipped out of the Vatican Monday to address the assembly of Jesuits who on Oct. 14 elected their first-ever Latin American superior, the Rev. Arturo Sosa of Venezuela.

The Society of Jesus, as the Jesuits are formally known, is the largest religious order of priests and brothers in the Catholic Church.

In his remarks, Francis urged the priests to “walk together, freely and obediently, going to the peripheries where the others don’t arrive.”

In addition to the usual vows of poverty, chastity and obedience, Jesuits take a fourth vow of obedience to the pope regarding their mission.