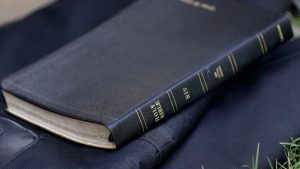 “A Bible was removed from the waiting room of a Chillicothe Veteran Affairs Medical Center in Athens, Ohio after a veteran complained. “Our government is secular, and must remain secular,” the unidentified veteran wrote. Mikey Weinstein, the founder of the Military Religious Freedom Foundation, fired off a letter to the medical center on behalf of the veteran – alleging that the presence of the Bible inside a government facility is a violation of the U.S. Constitution. Weinstein, a fussy man with a strong aversion to our Lord, said the Bible’s placement in the waiting room was “illicit and unconstitutional.” In other words, “Good Housekeeping” is fine, but the Good Book is not.” –Source

First and foremost, to make the claim “Our government is secular, and must remain secular” is not going to fly when the Lord finalizes judgment on the person that said it. Everyone, knows that when the government claims to separate church and state it is a bold faced lie. They will use the church when they can benefit by it and they will slam the church when they can benefit by it as well. The 501c3 as well as the so called “lessons” in the Koran in most public schools confirms this as concrete fact.

The 501c3 forced the weakened churches to join with the State so as to become the image of the beast prophetically. And as expected, they used to golden carrot to do it. But nary a soul, and this includes many SDA pastors that declare I am wrong, (because they all have the 501c3 – Click here to look them up) but the reality is the Vatican is a church and state conglomeration just as prophecy said they would be and the American churches are now a church and state conglomeration as well. No getting around that long prophesied fact of political / religious life in the USA. But because most pastors also stand on the pulpits emulating the mindset of the Vatican prelates wherein they demand you trust their sin biased opinion over the written and expressed will of God, most people don’t know about any of this and so they will echo their lying pastors and declare I am wrong about what any grade school student in the pew can see. Their church is in fact joined at the hip with the government and as of March 7, 2006 they became official government agencies when Bush signed it into law. So here we see how the government benefits by forcing the church to become one with Rome and therefore under the thumb of the government where the sermons can be easily censored and the masses funneling into the mega-churches can be corralled. That is one major benefit to the government prophecy says will not only help the Vatican beast, they will become just as bloodthirsty as that beast.

As for the other toss of the coin. When it doesn’t benefit the government to pander after the church on one hand while keeping the other hand under robes with the dagger well gripped, we now see in the public school system that Christianity is in fact banned. Literally. You cannot mention Christ in school anymore and if you get caught you can be suspended. And thanks to Roman Catholic President John F. Kennedy, all prayer in the schools is illegal. Seriously.

So on one hand they pander to the church; (in a deceptive manner that proffers control) and on the other they out and out attack it. Still.. even here the hypocrisy reigns supreme where the schools are told by the government to shout “KEEP THE CHURCH SEPARATE FROM THE GOVERNMENT!” Yet if you do just a little research; (start here) you will find thousands of articles wherein the “religion” of Islam, Satanism and even ancient Paganism is being taught in American schools under direct orders of the same government that claims there is a separation of church and state.

But when it comes to the VA or the military itself as this article touches on? I must say I am appalled and shocked to say the least. Why is it that in a profession like the military forces where you can literally die on the job, why is it we see strip joints circling military bases making tons of money selling sin at a discount as well as banning bibles on military bases and now the VA? Or what of the many military chaplains that lose their commission simply because they mentioned Jesus or declared the Bible true when it comes to homosexuality? It’s because as students of prophecy have been saying for decades. Christianity has been infiltrated via the many wolves on the pulpits to appear less valid and Christians are to become third class citizens in America right before the mark is enforced. And no, I am not talking about the lukewarm Christians that ignore the Lord in everything from the Sabbath to the health message or the ones that declare Allah is God and the Koran is as holy as the Bible. I am talking about the remnant of her seed wherein the masses will surround us on that great and dreadful day seeking to kill us when in fact it is their lives that will end instead. Only those obedient to the Lord can declare, “Lo, this is our God; we have waited for him, and he will save us: this is the LORD; we have waited for him, we will be glad and rejoice in his salvation.” -Isaiah 25:9.