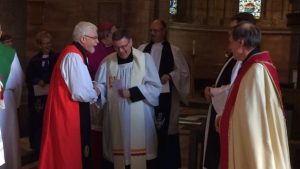 “Plenty of people on both sides of the political aisle have described the stakes of the upcoming presidential election in biblical terms. But at least one person in a San Diego Catholic church took things a step further in recent weeks. In an insert to the Immaculate Conception Catholic Church’s weekly bulletin on Oct. 16, a flier told parishioners that “it is a mortal sin to vote Democrat,” according to NBC 7 …The church’s publications didn’t just offend parishioners, who called them a “disgrace” and a “shame,” but they also potentially violated tax law. Specifically, the “Johnson Amendment,” proposed by Lyndon B. Johnson as a senator, prohibits tax-exempt charities, or section 501(c)(3) organizations, from participating in any political campaign for an elective office, according to The Washington Post. ” –Source

Now yes, I know, this is old news. And I was planning on posting this a week ago, but articles that were more pressing came up and I was called away from home for a day as well. So it stayed on the back burner for a while. But I still can’t ignore what’s happening here and so I must share what the Lord showed me on this. Especially since I made the video “Trump and the Prophesied 501c3” back in July.

As we know by that video I posted, Trump opened the eyes of quite a few “pastors” about their political powers when he made those remarks on camera in July. And I place the word “pastors” between quotation marks for a reason. Truth is, according to biblical jurisprudence, they are wolves first and pastors second, but only for the financial benefits of being as such. That is why they got the 501c3. They are as prophesied; they are the preachers of filthy lucre. (money)

So, how does this statement from Rome about voting for Democrats fit in to all this? Well, actually in two ways. #1, they are actively and openly breaking federal law by making such a statement in the public arena. The 501c3 contract they signed (and invented via Jesuit control of Lyndon Johnson) clearly dictates they cannot make political statements from the pulpit. Doing so is a criminal act. But Rome has never been one to obey biblical jurisprudence as outlined in Romans 13:1-7, and so the laws of the land are nothing but hurdles to politically circumvent. Need I remind you of John Paul II’s hurdle jumping? It was stated back in 1981 the following..

And now this man, who was a Nazi war criminal is considered a Saint by over 1.2 billion Catholics? So is it any wonder they ignore laws of the sovereign countries they stand in? The fact the smaller churches get shut down and fined for making the exact same statements the Popes do and Rome skates merrily along on their ice rink of deception confirms this hands down.

As for #2, what have I been saying for decades? Check out some of my old Newsletters, my sermons and even some old WTPR broadcasts and you will see I have stated many times that America will see a crop of very evil presidents and unjust laws passed by these wicked leaders over the decades so as to generate an atmosphere among the population of being fed up (no pun intended) with the federal government! After it goes overboard, as we have seen lately, Rome will make sure a man comes to DC that they can use to supposedly clean up American politics and make it more palatable for the “Christians.” And by Christians I mean watered down lukewarm sinful souls that as Isaiah 4:1 predicted will only claim the name Christian to take away their shame. We are in the last days and so the majority will be subject to be in that number. Trump looks to either be that man, or at the very least the catalyst that will bring in that type of religio/political format of governing into the U. Or as prophecy calls it, a church and state format in America. Don’t believe me? Check out what the Vatican has been demanding for decades.

Rome knew for a fact that making such a political statement towards the evils of Democratic politicians will open the flood gates in the conservative mindset that will help them bring to fruition they have been working towards since 1929 when their prophesied wound began to heal. And so it appears the long expected fix is in.

Trump stated in that video that the Christians are the “most powerful lobbyist” in American politics. This is why I don’t see him scrapping the 501c3 any time soon. All I see him doing is scrapping the gag order towards religious free speech in it so as to keep the ability to lobby intact. Prophecy will be fulfilled and there will be Sunday laws. Prophecy also says they will come in America first. And they will come via a church and state conglomeration that emulates the Roman Catholic Beast. That all being said.. are you ready? ARE YOU SURE?!