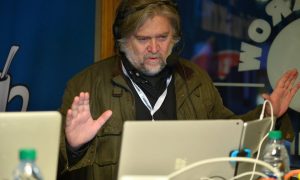 I’ve used articles many times over the years from Breitbart and I know for a fact there is not a single line of hate in any of the articles. But we are in the age of lying when truth becomes the lie and the lie is now truth and so it’s the norm for some in power as well as deception to assume love equals hate and hate equals love.

Take for example the way the homosexuals like to claim Christians hate them when they try to warn them about their eternal plight of damnation. There isn’t a more loving gesture known to man than to try to help someone out of danger. And when I say Christians I mean real ones. Not the bullhorn holders that scream hateful slurs at homosexuals, fornicators or drunks just to name a few. Those people are not Christians. But seeing how most people hate to be rebuked for their sin today, and this includes everything from dress reform to homosexuality, most people will associate the loving Christian act of concern with the hateful screamers and so they vindicate themselves in their sin just as expected. So even if you share love, due to the way society has brainwashed hate into the minds of most, your loving act will be considered hateful.

What we see happening with Breitbart news is nothing new either. Those that place a political agenda above common sense will always use force to quite the truth. Rome did that during the Inquisitions and her cohorts in arms do that today in the media. But for them to claim Breitbart’s articles would incite violence is as believable as it was when some so called “religious leaders” in Chicago demanded preachers stop going door to door with Scripture trying to share truth with Jews because that would incite violent hate crimes. Below is an excerpt from back then.

And no, I am not comparing backing Trump and his political pundits as being on the same level as some Baptist preachers using Scripture. Not in the least. Trump’s fruit declare he needs us to pray for him just as must as we should for any president who is not walking with the Lord. What I see AppNexus doing here is the same thing the religious leaders of Chicago did years ago. AppNexus hates Breitbart just as those religious leaders hated Christians who wanted to share their faith.

And why do you suppose that is?

It has to do with Rome’s ecumenical agenda. The only way to get all the people to see the Pope as THE “moral leader on earth” would be to have all agree with him on a multitude of issues in the church including evangelizing. He does not want people trying to convert Jesus to Christianity because it will upset the Jews. Don’t believe me? Check this out…

In short, the so called religious leaders will do all they can to prevent boat rocking on any level. Be it the church or in politics. Free speech is something Rome fears with a passion. Especially now that the loud cry is banging on her doors. And so, as their long studied teacher, aka dying angel taught them of old, they too will use their powers to quench the truth presented so as to make peace. And what did the prophet Daniel say about that?