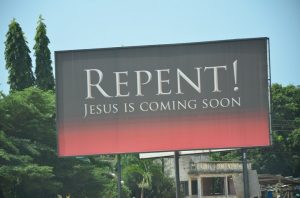 “A Christian computer scientist predicted that, based on her calculations and analysis of the 70 “sevens” prophecy mentioned in the book of Daniel, the return of Jesus to earth is imminent—and it won’t even reach 2017. Nora Roth, a self-proclaimed Bible student, said the second coming of Christ will happen in three weeks, specifically on New Year’s Eve. Her findings, written on her blog “The Mark of the Beast,” are based on the biblical pattern of following the sabbath. Roth cited that God mandated the seventh day of the week to be the sabbath day. He also instructed the Israelites to observe the sabbath year or sabbatical year, which is the seventh year of the seven-year agricultural cycle.” –Source

She then proceeds to twist the daylights (literally) out of Scripture so as to preach and uplift light-less Vatican dogma first preached by the Jesuits of Rome when it comes to a secret rapture, seven year trib theory as well as the so called 1000 years of peace on earth. Which was actually the way Satan was able to get most Jews 2000 years ago to reject the Lord Jesus Christ as Messiah. They expected a muscle bound warrior who was to end Roman rule and take over the world wherein the Jews would reign with Him as priests and prophets. Seeing how they fell for it then, Satan is using the exact same lie today with a slight twist to it.

One would think that a “self-proclaimed Bible student” would in fact open a Bible and read all of it instead of just echoing fabricated dogma of the Jesuits like most lukewarm Christians today do. This is why the world and especially the church is such a mess. In this age of convenience most prefer to have their pastors do all the studies while they enjoy all that the world has to offer.

I not only have all the Bible verses compiled that confirm the Seven Year Tribulation is an easy to prove lie posted here; I also have all the verses these false prophets, wolves and demon inspired teachers refuse to share on their pulpits when it comes to a so called secret rapture. Not to mention of course the old standardized lie of 1000 years of peace on earth which if the Christians sitting in the fallen churches would open a Bible for themselves they would have seen these hidden from the pulpit verses confirm their priests, prelates, pastors and popes are lying to them. Now do you see why Rome hates the Bible so much? They know if you open it you not only leave their church, you also have the truth that can be shared to get many more out of their churches.

Students of prophecy know a false prophet when they see one because we actually open and study our Bibles. And to be honest, when it comes to such unbiblical prophecies and doctrines like the seven year trib, secret rapture or even the 1000 years of peace on earth lie, we don’t even have to study them up because we know what the Bible already says on these things. The only reason I did the studies is because like many watchmen like myself, I like to show the people how the prophesied wolves are lying. In fact it’s my duty. It says in Ephesians 5:11 that we are to  “Have no fellowship with the unfruitful works of darkness, but rather reprove them.”

Just so you know, we actually have one Bible verse that makes all this ridiculously easy to expose. It’s found in Matthew 24:36 that says, “But of that day and hour knoweth no man, no, not the angels of heaven, but my Father only.” For this woman to set a date for the Jesuit contrived doctrine of a secret rapture occurring 3 weeks from now confirms she is a false prophet. Seriously, even if there was a secret rapture, (which there isn’t) claiming the date of its occurrence to be 21 days from now means we would all know the exact date of the return of Christ. What I mean is, the false teachers and prophets claim after the secret rapture is a seven year tribulation period. Therein lies the problem. If we know the exact date when the “rapture” occurs, all one needs to do is count forward from that date to exactly seven years in the future and you would have the exact date of the return of Christ! In short, the Jesuit dogma’s structure is easily exposed as a lie as its very foundation is based on an exact date which my Bible says no man knows expect the Father in Heaven.

But even mores exposing is the biblical fact that certain prophetic events must occur before the return of Christ. That being of course the enforcement of the mark of the beast. So I have to ask, how is it all those prophesied events that have to come to fruition first so as to enforce the mark upon every soul on earth and then in so doing prevent every soul on earth from buying and selling for a period of time that is long enough to weed out the weak ones to then finally come to the prophesied second stage of the mark’s enforcement, being the death penalty, wherein all the strong Christians who didn’t crumble under the buying and selling enforcement are now targeted for the gruesome death penalty by guillotine which then brings on the 7 last plagues before the Eastern sky even begins to show signs of heralding the arrival of Jesus Christ as King? It’s not prophetically, historically or even humanly possible for all that to go down in the next 21 days. BUT.. if you are one that prophecy declares will embrace the “strong delusion” spoken of in 2 Thessalonians 2:11, wherein you believe the lies of Rome regarding a secret rapture, seven year tribulation that are supposed to happen after the so called obedient Christians leave, then yes, you will believe this all, hook, line and pitchfork.

And by the way. Have you noticed? The preachers of the 1970’s and 80’s and even some in the 90’s who still preached this folderol, were claiming certain intense events where to happen during the seven year tribulation. They even went so far as to say the Christians will not have to deal with those difficult times due to the secret rapture. But many of those preachers stopped saying that in the last 20 years. The reason they finally clammed up is most of those prophecies have already happened! That’s right! These false prophets that laughed at students of prophecy stopped preaching what we exposed as a lie back then. They also stopped laughing as well. But, what they haven’t stopped doing is “making merchandise” of their flock by raking in the cash.

Bottom line is, if you don’t read your Bible DAILY you will be easily swayed like billions on this planet have been to not only believe these false prophets, you will believe Satan who is soon to stand on earth acting as Jesus Christ is in fact the prophesied Messiah of the Jews. And so you , like the billions of your planetary cohorts will spiritually stand in unison to declare out loud that you will accept Sunday as holy as Satan aka “the One” commands you must do as a show of loyalty and you will be forever sealed with the mark of the Roman beast that will guarantee you will see 1000 years of peace on earth. But not in the way you assume. The obedient Christians will be in Heaven experiencing true eternal peace as only Jesus can offer. You however will be one of billions strewn all over planet earth as rotted corpses under the toes of Beelzebub for 1000 years of peace in earth. There will be peace on earth for 1000 years yes. But its only because those that would remove peace are all left behind dead.