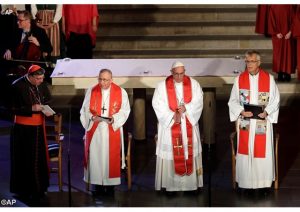 (Vatican Radio) As we mark the annual week of prayer for Christian Unity, Catholics have much to celebrate because 2016 was “truly an ecumenical year”. That’s the view of Cardinal Kurt Koch, president of the Pontifical Council for Promoting Christian Unity, who accompanied Pope Francis on all his ecumenical journeys throughout the past year.

The cardinal was reflecting on the theme for this week of prayer which is centred on a verse from St Paul’s second letter to the Corinthians: ‘Reconciliation: the love of Christ compels us’. Members of the Council of Christian Churches in Germany were asked to prepare material on this theme which is set in the context of this year’s 500th anniversary of the Reformation.

Cardinal Koch talked to Philippa Hitchen about this year’s event and about the many significant steps towards Christian unity which took place in 2016….

Cardinal Koch says the leitmotif for this week of prayer is reconciliation, proposed by Christians in Germany, where the Reformation began. While we have much gratitude for the Reformation and the rediscovery of all that is in common between Lutherans and Catholics, he says, we must also recognize the painful history of the last 500 years. Though Luther did not want to divide the Church, he notes the “horrible confessional wars” that followed the Reformation “transformed Europe into a red sea of blood”. We must acknowledge both of these pages, he says, working for repentance and reconciliation, but also showing gratitude for the gifts of the Reformation.

Commenting on the Pope’s recent visit to Sweden for a joint commemoration of the Reformation, the cardinal says the meeting in Lund was the fruit of the dialogue that has been taking place between Lutherans and Catholics since the Second Vatican Council, in particular the signing of the Joint Declaration on the Doctrine of Justification in 1999 in Augsburg. Without this progress at doctrinal level, he says, the event in Lund would not have been possible. Stressing that the event had two parts, an ecumenical prayer service in Lund cathedral and a celebration of cooperation between Catholics and Lutherans in Malmo stadium, the cardinal noted that it’s “very close to the heart of the Holy Father” that ecumenism is not just about theology but also about concrete collaboration for all of humankind.

While the Reformation is at the heart of this week of prayer, the cardinal says there is a great need for reconciliation to mend relations and heal the splits in other parts of the Church, from the divisions of the 5th century over doctrinal decisions of the Council of Chalcedon, to the split between east and west in the 11th century and the divisions with Anglicans in  the 16th century. Reconciliation, he says, is  the main theme of our faith and in Chapter 5 his 2nd letter to the Corinthians St Paul explains that it is God who reconciles himself with us and, as a consequence, we must be reconciled with one another.

Cardinal Koch reflects on the events of 2016 which he says was “truly an ecumenical year” with so many key encounters, beginning with the historical meeting between the Pope and the Russian Orthodox Patriarch in Havana, followed by his pilgrimage to Lesbos with Patriarch Bartholomew and the Greek Orthodox Archbishop Hieronymus of Athens, which he describes as “a very important sign”  that refugees are at the heart of the church. Finally he stresses the importance of the pan-Orthodox Synod in June, and the new document produced by the Catholic-Orthodox joint commission in September, as well as the Pope’s journeys to Armenia, to Georgia and to Sweden.