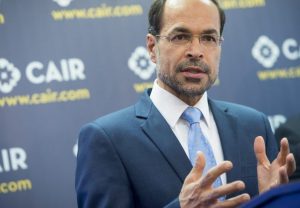 Muslim, Christian and Jewish leaders gathered at the national headquarters of the Council on American-Islamic Relations (CAIR) in Washington, D.C., Wednesday to condemn expected orders by President Trump that would stop the resettlement of Syrian refugees in the United States and impose travel restrictions on visitors from several other Muslim countries.

CAIR co-founder and executive director Nihad Awad said that such action, which Trump has yet to formally announce but which he repeatedly endorsed during his presidential campaign as a national security measure, “does not make our country safer.”

Rather, Awad said, “it will hand a propaganda tool to our enemies who promote a false notion of an American war on Islam.”

An additional order, which Trump is expected to sign as soon as Thursday, would impose an indefinite ban on Syrian refugees as well as a temporary hold on the resettlement of all refugees from other parts of the world. The order would also ban anyone from Iran, Iraq, Libya, Somalia, Sudan, Syria or Yemen from traveling to the U.S. for one month.

Trump’s approach to immigration, Awad continued, including his “multibillion-dollar monument to racism on our border with Mexico” as well as the expected travel ban, “flies in the face of the American inclusion that we all hold dear.”`

Berman said that one side of his family fled Nazi Germany in the 1930s, while his grandparents on the other side survived the Auschwitz concentration camp in Poland. Though they were all lucky enough to receive asylum in the United States, Berman noted, there were “many who did not make it out and died as a result.”

“Make no mistake that suspending immigration [and] refugee resettlement will result in more deaths,” he said. “People will die in refugee camps.”

Orders like the one Trump is expected to sign Thursday, Berman said, “go against the most basic of human values” and are “an affront to us, an affront to all human beings, and an affront to God.”

Rabiyah Ahmed, of the Muslim Public Affairs Council, which advocates for the civil rights of American Muslims, reiterated the argument that such restrictions on immigration and refugee resettlement will create a “false sense of security.”

With “the continuing scapegoating of minority communities,” Ahmed said, “what Trump is saying is that, as president, he’s really not committed to upholding the values that we hold dear.”

Like Berman, Rev. Steven Martin of the National Council of Churches offered solidarity with the Muslim community as well as other immigrants who will likely be affected by Trump’s policies.

“I cannot believe that state sponsored persecution against a class of Americans is taking place,” he said. “Even though I’ve been watching it grow, I cannot believe it.”

Martin said that the National Council of Churches, which represents roughly 45 million Christians from 38 religious denominations across the U.S., supports sanctuary cities and condemns “any attempts to define terrorism as a product of any one religion,” as well as “any attempts to place a religious test upon refugees attempting to build their new lives in the United States.”