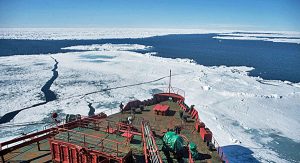 “A posting at Real Climate Science has delivered a body blow to the global-warming agenda – now called “climate change” since the globe doesn’t appear to be warming anymore. It shows the Arctic sea ice today is about the same thickness as it was 75 years ago. That’s despite the massive spread of SUVs, the use of coal-fired power plants to generate heat for homes and gasoline-powered lawn mowers and leaf blowers. The posting Tuesday from Steven Goddard, blogs under the pseudonym Tony Heller, featured the image of a 1940 Townsville Daily Bulletin report that “ice measurements were on an average only 6 ½ feet,” according to a just-returned expedition of Soviet explorers.” –Source

None of this is going to matter one iota because Christian prophecy will be fulfilled. But we certainly can use this scientific evidence to bolster the truth regarding the man of sin in Rome. Thanks to the recent elections most Americans and now most people in any nation know for a hardened fact that the main stream media is a well-oiled joke. Students of prophecy as well as some well-educated anti-Government types who actually did some homework into reality have been stating for decades that the powers that be are lying using the media so as to push the government’s agenda for mass control. Obedient Christians know why this is happening, but the anti-government types, as educated and in some cases as honest as they are, they simply have no clue. What we see happening here has to do with the enforcement of the mark of the beast. And that is why I say this cannot be stopped. Christian prophecy will never fail. And this includes the fact that Trump removed the Climate Change page off the White House website. Like the TPP that he shut down the other day, it will be back with what he will claim is a “better deal” that he was able to negotiate so as to make sure glory settles in the areas he prefers. After all, he’s not a  young man and he needs to puff up the name Trump even more so that if the Lord tarries much longer, his children will benefit by his legacy long after he’s gone.

So, how can the Remnant use this?

It’s easy to see as the nose on your face. In fact, let’s start there. First and foremost we know the media is the same as it was in Hitler’s day. A well-oiled propaganda machine. And we also know global warming is a lie because the Vatican’s small handful of bought and paid for scientists cannot refute the scientific facts nor can the Vatican effectively kill off 31,487 American Scientists that have exposed their lies. You just can’t fabricate that many “suicides” and get the majority to believe it. But the real clincher comes with the lies they promote and how the truth we preach will bless those with eyes that see.

We know the media is bogus and therefore anything they push relentlessly is going to have to be in agreement with the Vatican contrived NWO agenda. There’s no way around Bible prophecy. As we also know, the planet was created to recycle itself quite nicely. In fact it was just confirmed that the CO2 levels of today are the exact same as they were in 1910. All those SUV’s, coal burners, lawn mowers, and flatulent cows have no real effect on the air we breathe unless we live in a valley wherein the pollution can linger. But the God that made the planet is the same that made the human body. Take the tobacco smoker for example. Quit smoking and you will see, depending how long you smoked, your lungs will pink up within a month to a year. And if you quit young enough they will totally heal with 5 years.

The bottom line here is, literally billions of people on earth know for a fact now the planet’s not warming at all. In fact it’s cooling. The three feet of snow in the Sahara Desert is just one of many ways to prove that. The powers that be got caught lying and we not only have the scientific facts to prove it, we have the prophesied facts that show why they lied. But the real difficult task is going to be in reaching the city dwellers. The majority of the people in the smog choked cities bought into the lie and their own eyes will be deceiving them daily against the truth.

And I mean really look around! In fact, download google earth, or look at a map or a globe that has city names on it. Notice anything strange? There is a lot, and I mean a LOT of empty space out there wherein no people frequent. Now, look around in the city. Everywhere you look the roads are getting thinner due to more traffic. The apartments are getting taller to pack in more people. The pollution lingers longer due to the concentration of cars, trucks, busses and yes all the belching factories on the industrial side of town. And the media keeps all that in your mind day in and day out 24 hours a day, 365 days a year! They keep showing everyone what all those puny little cities that don’t even look like a freckle on a map are supposedly doing to our massive planet. And the people who can’t see past their own noses are buying it all hook, line and sinker because they live in the city and that’s all they see. But if they were to do the math (as they did in this video) the entire population of earth could easily fit in a small city about the size of Palestine’s geographical footprint! In other words, the so called population explosion problem is astronomically nowhere near an actual problem for planet earth. THEY LIED!

And since lies are the native tongue of the dying god of Rome, he and his Vatican pawns are betting on the fact that the majority of the people that live in cities will believe them when they say the human population is out of control. Those city dwelling people will easily believe it because to them, that’s the basic reality of their society. But get some of those people a map of the world, or drag them into a car and drive them outside their city into the rural areas and just maybe they will wake up. I’m sure the fresh air will also make it easier for them to think clearer and see that it’s all been a bold faced lie from day one. But as prophesied, the lie will still continue and the overwhelming majority will believe it when the Pope says we need Sunday Laws to stop all the calamities brought on by global warming. But now.. as Christians we have a way to expose the lie and prove the truth!

Teenage mother arrested after ‘taping’ two-year-old son to the wall so she could do housework * Graphic Photos: Islamic State Executes Man Who Cursed Allah * University crackdowns on speech will get worse in response to Trump, new litigation chief says * VIDEO: Wildfires Raging: ‘Agricultural emergency’ declared in Argentina * Transgender man tries to join a sorority at Northwestern * VIDEO: Idaho Dems Exec Director: DNC Should Train People In ‘How to Shut Their Mouths If They’re White’ * VIDEO: Planned Parenthood BUSTED! They do NOT offer prenatal care AND ADMIT IT! * Report: Obama Gave $221 Million to Palestinians in Last Hours * Mystery: Obama’s favorite imam gets to pray with Trump * Where Obamacare stands now