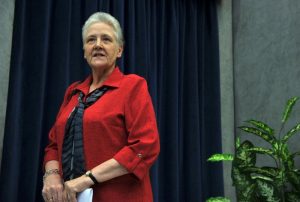 “Marie Collins, an Irish survivor of clerical sex abuse, resigned Wednesday from Pope Francis’s child protection panel, accusing senior Vatican officials of “shameful” blocking of reforms approved by the pontiff. Collins’s departure and her depiction of high-level obstruction of change is an embarrassing blow to the pontiff’s attempts to demonstrate that the Church is effectively combating a scourge that has profoundly damaged its image over recent decades. The 70-year-old, who was raped by a hospital chaplain at 13, explained her decision in an article for the National Catholic Reporter (NCR). As a survivor I have watched events unfold with dismay,” she wrote. Her resignation happened days after Francis came under fire for reducing sanctions imposed on some paedophile priests in line with his desire for the Church to be more merciful across a range of issues.” –Source

Never seems to end does it? And what’s truly shocking is, even though this woman, a devout Roman Catholic, sees how her Vatican priests are blocking every attempt by her to do as she was hired to do, and that was to find a way to protect the children from the child molesters in her church leadership, she not only walks off the job proving the Vatican has no real interest in stopping their flesh crazed pedophile recreational past time, she has no intention of leaving her beloved church. Now keep in mind, she wasn’t only hired to help the Vatican figure out a way to help protect the children from the child rapists in the priesthood, she herself was a victim of sexual abuse by this very same priesthood. And all this comes to light just four days after the Pope himself quietly trims sanctions for sex abusers in his priesthood that are seeking mercy for the crimes they commit against the children?! (Not surprised since the last 2 Popes did the same thing!)

The church of Rome has proven hands down to be as Revelation 17:5 describes, which is, “..MYSTERY, BABYLON THE GREAT, THE MOTHER OF HARLOTS AND ABOMINATIONS OF THE EARTH.” Not only does this long exposed church of Antichrist trap the innocent and religiously loyal people in the pews using the strangest dogma known to man, it appears they have an uncanny ability to keep them in there even if they rape their own church members and even the children of those members! That my friends can only happen when the lie becomes the norm and the truth becomes offensive.

Seriously, think about it!

If you were part of a secular group that you grew up in and one day discovered that not only was that group being used by the devil to systematically destroy your faith in God, it was also proven to you to have an insatiable lust for the flesh of your very own children, would you out of common sense remain a member of that vicious group? No, of course not! You would leave that group immediately! But what if that group claimed to be a Christian church? And not just any church, one that has been prophesied to be used of Satan to convince its members that you can still gain heaven while enjoying sin as long as you stay in that church, then you not only stay in it, you defend it! Now THAT is one mysterious power that only a surrender to Jesus Christ as Saviour can any soul on earth ever hope to escape and overcome.