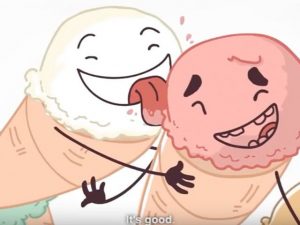 This man (Bill Nye) is one sick soul. And yes, this is the same man that said people that deny his proven bad science and agree with 31,487 Scientists that confirm Global Warming is wrong, should all be jailed as war criminals. So as is apparent, Bill Nye is more about the politics than the science. And now making this cartoon pushing perversion in sex, it’s now confirmed he really is all about politics. I have no doubt in mind that his cartoon, or a facsimile thereof will eventually appear in schools across the nation to further indoctrinate our precious children towards a perverted normality in life. This man is one angry man and his anger is mostly focused on the Creator God, as most in today’s main stream media are. And this cartoon confirms that big time.

Let me ask you this, if the Bill Nye was to make and then post a cartoon to the main stream media exposing all the insanities about Islam and their easily proven false “religion,” (as this person did) he would not only be removed from the air, he would be in grave danger of losing his head. But because the Christian religion is known for its love filled approach towards sharing biblical truth wherein we understand we should “do violence to no man,” (Luke 3:14) he assumes, like all the rest (especially Rome) that our kindness is a sign of weakness. But as he and all his cohorts are soon to discover, when Jesus comes the second time, His wrath will fall on all of them and it will be so terrifying that even the most powerful of all tyrants known to man will be found in abject fear no one alive can ever describe.

And one last thing, check out this article that just came out today. “Bill Nye, now the gender-spectrum guy.” In the article it states, “The so-called “Science Guy” recently launched a Netflix series called “Bill Nye Changes the World.” In one episode, he pushes the idea that gender is a spectrum and not merely a matter of male or female. Nye claims the gender binary is “more like a kaleidoscope” and “what makes someone male or female isn’t so clear cut.” However, Nye was singing a different tune back in 1996. In an episode of “Bill Nye the Science Guy” that year, he promoted the scientifically accurate idea that chromosomes determine a person’s gender – and there are only two options.”

So Bill Nye is merely lying to make money because we all know about the real science behind procreation. Even a homosexual standing naked before a full length mirror can see how their own body testifies against them when they say they declare their lust of the same sex. Their body clearly confirms they need the opposite sex to procreate. But when you’re so used to the lie, and especially if you’re a professional liar as all Hollywood actors are; the comfort of the lie they are so accustomed to becomes much more believable than the truth even if you have rock hard scientific evidence to support it. The easily exposed lie of evolution has proved that as fact for quite some time in society.

As for Bill Nye and his dwindling career, he like so many before him discovered they can always promote the Vatican’s homosexual agenda as well as their climate change agenda so as to make a few million dollars quickly. As any real scientist can confirm when it comes to climate change, Bill Nye was never about real Science even in his early years and he is no more serious about it now. This is why he usually appeared on children’s programs. Both climate change and this most recent highly perverted cartoon presented by Bill Nye confirms this. He was and always will be about entertainment as well as anything that belittles the Creator God. (yes, he is pro-evolution) But like with many Hollywood shows, eventually the public grows tired of your style and you are eventually canceled and so he is doing all he can to remain in the public eye. And seeing how the mainstream is all about blaspheming the God of creation, he has jumped on the same bandwagon that many others have so as to pay the bills.

Now do you see why so many Hollywood stars delve into politics? They know all about how big money flows through DC. They also know they can use their fame to try and spark new exposure and uplift their career, even if it is fleeting at the time. I guess the days of old actors making Insurance commercials are slipping away fast for the more lucrative cash cow in politics. And why not seeing how an actor is nothing more than a bought and paid for professional liar. Common sense dictates that when you act you are not actually the person you’re playing, and so the lie filled cesspool of politics is no doubt a very attractive puddle to waddle in.

So please pray for these poor souls that have been lured into eternal danger by the oldest golden carrot known to man. And please don’t let their hateful tongue anger or sadden you. After all, before you met Christ and found perfect peace and joy you too were one to hate those that wore a smile when a frown was more expected. They too can find that peace, and so as Christians our duty is to pray for those that don’t see as we see.