Now U.S. government threatens to take all your cash 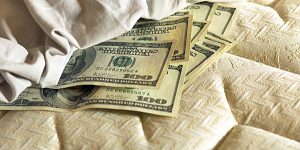 “In the name of fighting terrorism financing, a new U.S. Senate bill threatens to force private corporations to monitor your financial activity and empowers government to seize all your assets if you fail to comply with the new law. Even failure to fill out one form is license for the federal government to take everything you have. …If the bill becomes law, Americans would be subject to a whole host of government intrusions. One little slip-up would open a Pandora’s box of governmental inquiry into your financial life,” says Peter Reagan, a financial-market strategist at Birch Gold Group. “For example, failing to complete a single reporting form would result in the government being granted abilities to freeze and seize not just a portion, but the entirety, of your assets. The bill even goes so far as to include the contents of safety-deposit boxes.”-Source

Looks like Satan is getting a little worried and hurried in his final agenda because he knows that if the people have access to cash they can avoid the mark of his beast that his man of sin in Rome is about to enforce. As one of many students of prophecy, this is why I created a page titled “the expected cashless society” on the site many years ago about the Pope’s plan to make sure all cash is removed from society or at the very least digitized so as to control every dime.

As I stated all along, you cannot remove the ability to “buy and sell” from the people as prophecy says they will do if the people still have access to their cash. You must make all transactions digital or at the very least make cash illegal without a digital counterpart attached in some way so as to be able to control each and every transaction using globally networked supercomputers. Seeing how his time is short, Satan has opted to track all cash now by forcing this Bill upon the people via his many obedient puppets in Congress. Will it pass? No clue, no care. But even if it doesn’t pass as written, it will be rewritten and prophecy will be fulfilled anyway. Truth is, the suggestion of the Bill may just be Satan’s way of lighting a fire under his Senatorial pawns that lick the Papal boots so as to get them busy pushing his final agenda. He’s getting antsy and that’s a good thing because Jesus is coming a lot sooner than most care to admit.

The invention of the credit card sparked many sermons and tracts decades ago warning the people that this was the Vatican’s long prophesied end result when it comes to the cashless society they need to have in place in order to be able to enforce the mark. Yes, many scoffed back then as expected and I am sure some still scoff to this day because unless you are obedient to the God of all creation, you will not be able to understand the prophecies He has penned. And yes, this is why so many so called “prophets” and SDA leaders keep missing these political movements in the USA. They have no clue as to what it’s all about. But praise the name above all names that some have stopped scoffing now that we actually do have credit cards, debit cards, auto-pay, lcd cards, direct deposit, online banking, and cell phone banking. It is now painfully clear they are doing exactly as prophecy predicted they would do.

By the way, Remember the “Coin Card” video I made 4 years ago? As I expected it didn’t have all the features needed and so now there is a new and improved “smart card” that can do exactly as the Lord revealed back then! I am sure that if this Bill passes they will make it possible for people to “think” they can keep their cash by telling them to get it out from under their mattress or out of their home safe and place it in their local bank. That way they still “have” their cash seeing how their “smart cards” allow them access to every dime anyway. What they won’t tell them is that the very second they refuse to bow to the soon to come Papal mandate of Sunday Laws, all their cash will be “turned off” in their cards just as prophecy predicted.